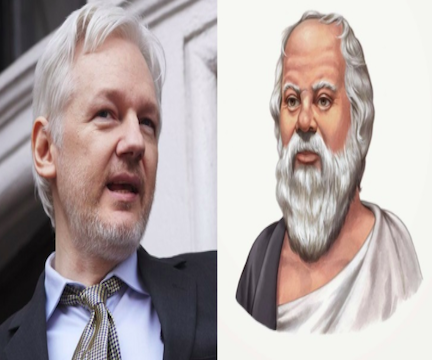 In all the time The United States has persecuted Wikileaks’ Julian Assange, democracy has needed to be re-examined for what it may really be. Is it a political system that guarantees all peoples’ meaningful involvement in government? Is it not?

Ancestrally so, American democracy is derived from the first manifestation of “rule by the people,” established around 500 BCE in Athens, Greece. About one hundred years after senior-ranking Athenian magistrate Cleisthenes founded the original of such governments, democracy was still the law of the land, when a philosopher, Socrates, was put to death merely for questioning authority. Like the philosopher, Assange has been brutally penalized for challenging governments, which he has only ever done by non-violent commitment to radical freedom of information. In his activism, he has always engaged in the constitutionally protected activities of press and expression. As the Twitter hashtag goes, “#JournalismIsNotACrime.” And it really is not a crime. Or so The Framers of our country claimed.

Assange and Socrates are very different in their respective attitudes towards democracy, the former being for all peoples’ human right to self-determine and the latter being against this form of government in an overwhelming way. What is similar about them, however, is the nature of the penalty imposed upon each for challenging authority. And the ramifications of these penalties are useful in understanding what “rule by the people” actually looks like.

What happened to Socrates and what is happening with Assange expose what democracy may originally have been and what it may continue to be at present. The stories of the Australian journalist and the classical philosopher suggest that this system of government is far more oppressive than what popular narratives about “rule by the people” have suggested. Silencing dissidents is an age-old practice, and it is as present today in American democracy as it was in classical Greece. Such a practice flies in the face of the aforementioned narratives. In other words, democracy may have never been democratic. It may have always been the opposite.

In a democratic government, predicated upon “rule by the people,” it is supposed to be self-evident that those in power will execute political processes in a way that serves the interests of the governed. Freedom for a people to express its concerns necessarily precedes any government’s materialization of solutions to those concerns. To put it differently, suppression of a person’s voice interferes with acknowledgement of that person’s voice within the political process. Penalties levied against a person, for making use of their voice in a political way, reduce the credibility of popular narratives about democratic political processes, which claim that fundamental to this form of government is the guarantee that its people can meaningfully engage in those processes. Ultimately drawing attention to the nature of such narratives, as he describes the power of social media in democracies, New York Times columnist Thomas B. Edsall once wrote:

What are social media platforms then but outlets for disseminating information for democratic purposes? In that way, they are publishers democratic in nature. While Wikileaks, also a publishing platform, has demonstrated far more commitment in publishing only truthful information than, for example, Twitter and Instagram have, it is still true that all three are, to substantial degrees, the same; they all provide means by which people may access information that informs the decisions those people make in political processes. Indicating this in an extreme way, incendiary and false information posted to Twitter by former President Donald Trump influenced angry and misguided citizens in their riots at The Capitol in January.

So when one person witnesses the negative consequences another person faces for questioning authority despite these distorted narratives about democracy, that person that bears witness to this abuse of power may shy away from meaningful engagement in government. And then the government may ultimately never have to listen to the governed again. At this point, the antithesis of “rule by the people” is all that remains. Publishing platforms shape the check on the power of any government that resistance by the public is, as is shown by the liberating effect Wikileaks has had on the world, as emblematized by its positive and precipitative effect on The Arab Spring and The International Criminal Court’s investigations into whether The United States had committed war crimes during its current conflict in The Middle East.

Given what happened to Socrates and what is happening with Assange, the first democracy in Athens and the ancestral framework around which America is organized was just as much the opposite of what it was supposed to be as American democracy is today.

Considered to be the birthplace of “rule by the people,” Athens led an assault on democracy by executing a philosopher it felt threatened the security of its power, a penalty imposed upon the man after he only ever engaged in verbal dissidence. Socrates relentlessly asked questions of those in power. And those in power, when the philosopher simply would not stop asking those questions, considered him a threat to the security of their authority.

Convicted of committing impiety against the Greek pantheon and inciting dissidence amongst youths, the philosopher had challenged too many bases of the Athenian government’s methods for managing its citizens. Dissatisfied with perceived deficiencies in cultural and political frameworks in ancient Athens, Socrates argued for alternatives to the pillars of that Greek city’s government in terms of the so-called “offenses” of which he was convicted. In other words, merely because he challenged authority by questioning its effectiveness, the philosopher’s government killed him.

In how The United States has libelously, defamatorily, and violently led an assault on Assange, it seems that the right to speak up, that is supposed to be inherent in “rule by the people,” is just as afforded only to the compliant as it was in ancient Athens. That Assange is not even an American citizen further problematizes what The United States is doing, suggesting the U.S. believes the world is its jurisdiction, when that is fundamentally not the case. It is in fact another indication of the American government’s illegitimacy in all its abuses of power and of its anti-democratic predisposition.

Again, Socrates and Assange differ radically in terms of their respective attitudes towards all peoples’ involvement in government, the former asserting the need for rule by an exceedingly limited body of people and the latter celebrating every person’s human right to self-determine by informed participation in the political process. It is only by having unimpeded access to information that the Australian journalist feels a person can make educated decisions as to how they conduct themselves within political processes, and that engagement is key to self-determination so fundamentally a part of what democracy is supposed to be.

Despite how different these men are, Assange still faces a penalty comparable to the one that Socrates endured. The United States is not seeking the death penalty. However, the Australian journalist and Founder and former Editor-in-Chief of Wikileaks faces up to 175 years in solitary confinement at ADX Florence in Florence, CO., a carceral facility that houses criminals as violent as Sinaloa Cartel leader Joaquín “El Chapo” Guzmán, Boston Marathon bomber Dzhokhar Tsarnaev, and “Unabomber Ted Kaczynski.” Early next month will mark two years that Assange has rotted in a maximum-security COVID-infested prison in rural London, as The United States continues to seek his extradition from The United Kingdom. And the Australian journalist has had to deal with this, as a result of how he only ever published evidence of America’s regular imperialistic criminality.

Illustrating the severity of the punishment Assange faces, human rights groups across the globe have condemned solitary confinement as torture. Most notably, Nils Melzer, the Special Rapporteur on Torture at the United Nations, has asserted that such a penalty constitutes cruel and unusual punishment. Already in November of 2019, roughly eight months after Assange’s asylum at the Ecuadorian Embassy in London was revoked and he was subsequently incarcerated at HMP Belmarsh in a rural area of the British city, 60 doctors authored an open letter pleading with English authorities that medical professionals be permitted to administer proper care to Assange, writing that, “Were such urgent assessment and treatment not to take place, we have real concerns, on the evidence currently available, that Mr. Assange could die in prison.” In other words, even prior to possible extradition, he has already been subjected to inhumane and unjustifiable penalties. In the letter, the doctors indicated they have observed in Assange symptoms typically resulting from torture. Subsequent letters from the same medical professionals indicate additional observations that the journalist remains in rapid decline as a result of the deplorable conditions of his incarceration.

Given that Socrates only ever engaged in expressions of dissidence when he asked questions about what he perceived to be ineffective about his government and given that Assange has only ever engaged in publishing classified information in an attempt to restore all peoples’ human right to self-determine as they participate in political processes, it seems that democracy today is as hollow as it was when it was first introduced to the world.

Since 2006, when Wikileaks was founded, Assange and the platform have only ever engaged in information-gathering and publishing practices standard to the news industry, expert witnesses that have testified during the extradition proceedings have said. In an article for Jacobin Magazine, Shadowproof.com Managing Editor Kevin Gosztola drew attention to such witnesses, writing that they showed that the practices in which Wikileaks and Assange have engaged are “indistinguishable from the standard practices of any American journalist, and really any Western media organization.” Gosztola cites the existence of anonymous drop boxes at most news publications, where anyone may submit any information without indicating an identity.

Yet the Trump administration has persecuted Assange and the Biden administration has preserved our former president’s abusive policies toward the Australian journalist, conveniently ignoring precedent that protects the activities in which all journalists engage, activities democratic in essence in terms of how they allow anyone consuming those journalists’ information to act in a more informed way during the political process.

To put it differently again, democracy may never have been what so many of us have been led to believe it is. From ancient times through the present, it may have always been an illusion behind which another system of oppression rears its ugly head. It may remain that way, unless radical changes are made and the charges against Assange are dropped. Perhaps democracy was not even conceived of as a truly representative government.