G7 and other Global Clowns 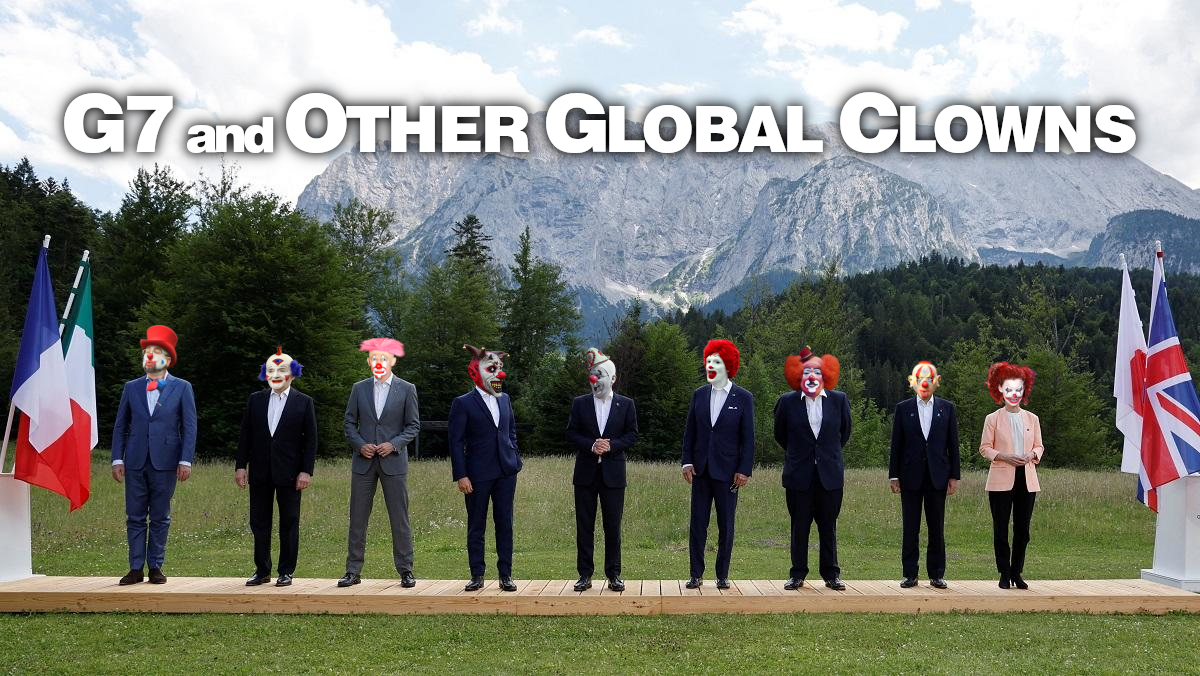 Climate and hunger crisis are caused by wars for oil and lust for power, these two, together,
are key elements pushing the world down the drain.

Ukraine and Russian war have given the further push to deepening of the crisis that were looming in the horizon. However, it never was the ‘root’ of the problem, regardless what the MSM is telling you. It’s just the final drop that made the class pour over.

How do you think tackling climate crisis, with war and gunpowder will end? The conflict between Russia and Ukraine has pushed the Europe and US into energy crisis with soaring inflation levels. Countries everywhere are looking for alternative ways to replace oil and gas supply from Russia, including increasing use of coal and other unsustainable materials. The Middle East is one of the major suppliers that could fill in the void. Regardless of the past pledges by the west, to take stricter stance in trading with countries that violate human rights, today they are bending corners in their conviction, under pressure for fuel searching for new oil supply agreements.

Israel and Egypt have already signed agreement with the European Union for energy supply. It doesn’t seem right, considering that Gaza strip is under electricity regulation, Israel is committing war crimes by killing Journalists wearing a Press vest and hundreds of Palestinian minors and youth are arbitrary arrested, held in prison without a charge. If the leaders are willing to sell their soul to the evil, how about the rest of us? Are we willing to heat and light up our houses when we know, that Palestinians gets the same opportunity few hours a day? Our existence is not privilege, to assume our wellbeing is more important than the others, because it means we have lost our heart and it has transformed to a stone.

The G7 and others are not discussing the situation in Palestinians or Yemenis, they are discussing how to save their face, towards their own nations and receive gratitude for stealing from countries that live under duress. For example, Yemen, that is suffering from fuel shortage and terrible famine is getting its oil looted by the Saudi, UAE, US, UK backed coalition. Yemen has a secret; its natural resources are including oil that today is in high demand. There will be indirect effect from war in Europe, in future of Yemen and will the country finally be free from foreign occupies and have peace. Saudi, UAE Coalition are including both the US and UK, who are at the present lobbying for new oil suppliers, including MBS in Saudi Arabia. Germany is deciding if it keeps its arms embargo to Saudis in the coming months. Putting everything together the events today are placing Yemen in more vulnerable situation because of its location, natural resources and direct access to sea.

If you have paid attention, you know that our own nations are rapidly falling under authoritarian governance. One more reason, to stand in solidarity with Palestine and Yemen, because disaster isn’t limited to location, what skin colour we have, hunger and poverty is hitting everyone in the same level, unexpectedly.

Palestine and Yemen are especially important because both nations have suffered for years, while the west have ignored the crisis. It’s our responsibility to make sure, that our crisis today, isn’t making theirs worse. Because the G7 and others are willing to sacrifice these nations for their own selfish wellbeing, it’s not about serving the mandate of their citizens, but serving the best interest of their coalition partner, be it a Saudi & UAE, USA or NATO.

While sending billions to keep the war going on between Ukraine and Russia, they need to push for dialogue and stop playing the victims of the ‘bad Russian guy’, or intentionally annoying China. They must start moving away from fossil fuels, to renewable energy and accept to keep the fossil fuels in the ground! This would save the planet from the climate crisis and end the wars for Oil.

For G7 to gain any respect at all, they must start working on global peace and stop supporting US hegemony in the world. End the blockade for Port of Al Hodeidah and open Sanaa airport in Yemen to allow import of goods, let the Yemenis elect their own government without interference of foreign countries.

Pressure Israel to withdraw from Palestinians lands and end its settlement program. It’s incomprehensible that it took them few weeks to sanction Russia for Ukraine, but are welcoming and financing Israel apartheid and shaking hands with the MBS of Saudi Arabia. If they had morality, they would withdraw all the support to Israel, Saudis and UAE, as quickly as they sanctioned Russia.

“G7 Silk Road” in sake of annoying China, have they asked permission from the local communities?

Lesson learned, “charity” done by Government is not for doing good, but receive something in exchange. Supporting infrastructure in developing countries is a good thing, when, and if done correctly. Unfortunately, the thought behind is not sincere. Seldom these plans are respectful to local communities wish. They are agreed with the local government that signs long term land lease agreements, receiving compensation that the communities never see. As seen with the China’s initiative the locals wants them gone. Here. The G7 is using Africa and Latin Americas to gain profit, exactly the same way than China has done already for years.

Looking around our own countries that are over developed and hard to find a spot of wilderness, it makes me think, if ‘our way’ has been the right way in the first place. We have destroyed much of our own nature, are running out of resources and continents like Africa and Latin America, that still have untouchable nature left, do they even want to have our life style, that is based on materialism and over consumption. Why it is difficult for the west understand that there are people, who live close to and in the nature, without a wish to adapt and adopt our way of life. When the heads of G7 are visiting the country, like a Santa Claus at the Christmas time, it is the beginning of the night mare to the local people. Our roots, values are inherited from our ancestors, while we might have lost our way, and have no respect to where we are coming from, for the Indigenous Peoples the land is life and the river their soul, they wish to see free, not transformed to hydrogen power plant. Without their lands people are losing the reason to live, who wouldn’t.

Both continents are filled with natural resources, the G7 member states are already exploiting and destroying rain forests and indigenous peoples lands. Why would they want to invest 600 billion without receiving return in investment? China’s silk road is one-way road for goods from other countries to China. We would be fools believing that the same wouldn’t apply to G7 initiative.

Like with China’s roads in Africa, they are built without bends, they run through national reserve parks and tribal lands, cutting off natural roads from the wildlife and communities. More people are getting internally displaced and end up living in slums without hope. Or worse, getting killed in the border, when trying to flee to Europe, one of the continents that caused them getting displaced in the first place.

The consequences of the “Good doing” or rather land grabbing have been disastrous in the past in both continents.

Serengeti Highway that was financed by China. Here https://www.forbes.com/sites/gordonchang/2010/09/17/the-chinese-road-across-the-serengeti/?sh=223195c279a2

The Paris agreement signed in 2015 and pledge taken to reach the global goal for clean energy, is executed in unsustainable way. Latin America has had many incidences with dams bursting and destroying homes, agricultural lands and displacing communities. The Latin Americas are turned to new Middle East, that was destroyed for controlling oil resources and placing US and allies friendly governments in power. Local communities have been clear of their wish, to let the rivers flow free, living in peace in their ancestors lands. Today, we are going back in time in hundreds of years, to time, when Latin American indigenous people were converted to Catholics at the gun point.

What good has our ‘Civilized societies’ ever done in foreign lands? The future isn’t looking clean, not when the West is exporting blood-soaked Hydrogen to fill up their cars. Producing crops in lands that were never for them to take. The Indigenous Peoples, local communities in Africa and Latin Americas have enough challenges, without the G7, taking part on destroying their livelihoods!

It’s time to choose humanity. Announce non-confidence to leaders that doesn’t deserve it and end our slavery and stop them taking advantage of other nations!

Stop the G7 and all the other Global Clowns!