Anonymous Bites Back is the live show created by and for Anonymous activists and hacktivists. The show is created by free speech activists from around the world, who want to offer a voice to anyone who needs it. 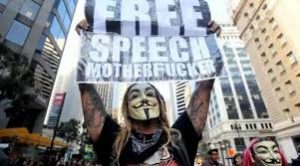 The show broadcasts to over 30 different platforms and uses their own site as a backup platform. Due to consistent censorship by large social media like Facebook and Youtube, the choice was made to decentralize. Using a unique system Anonymous Bites Back now streams to all the websites at once, so it will always be available somewhere.

Why a show for Anonymous?

Anonymous is a loosely organized collective, consisting of millions of activists online and offline. People who obviously do not have the same opinions about things. Anonymous does not have any leaders or members and there is no official Anonymous. There is no Anonymous company, foundation or anything that represents everyone. For this reason Anonymous Bites Back exists to give the different opinions among the collective a platform to speak. Without bias, without censorship and focussed entirely on free speech. The team has no political affiliations, even though certain opinions exist among the panel.

Anyone is welcome to come on air, broadcasts happen a few times a week. The Anonymous Bites Back shows last up to 4 hours an episode, with exceptions being even longer, and the longest one lasted 6 hours.

Have a look at the show right now using one of the links below:

Do you have something to share with the world? Or do you want to give your opinion? You are welcome to come on air with Anonymous Bites Back. The quickest way is to contact the team on Twitter at @ABBLiveShow but you can also join the Discord chat server here. You will always get a reply.