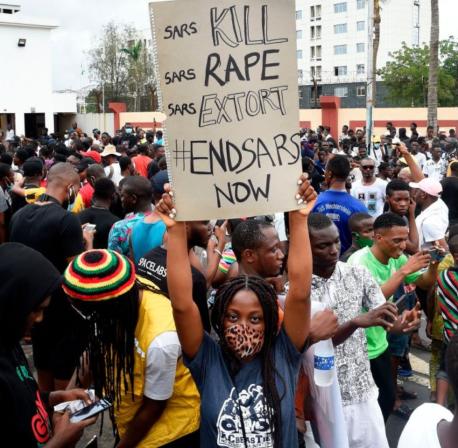 The Special Anti-Robbery Squad (SARS), founded in 1992, is a Nigerian Police Force unit directed by the Deputy Inspector General of Police Anthony Ogbizi. The aim in its creation was to deal with robbery, theft, kidnapping, crimes involving firearms and similar problems. Hiding under this reason SARS started to kill innocent people due to not supporting the leading party, protesting as well as the way people look for their ethnic styles of clothing or hairstyles. The SARS crimes of killing, torturing, beating and arresting have been protested widely under the hashtag #endSARS especially when they increase over the last couple months. About the historical background of the SARS it’s possible to find a lot of information at Wikileaks cables.

SARS got international attention when a man called Segun Awosanya started an online campaign to demand for its end in december 2017. Following it, a twitter account called @Letter_to_jack tagged #EndSARS hashtag at twitter to expand the online campaign’s reach and repeated the demand of scraping and ending the deployment of SARS.

Due to international reaction to the crime of the special police force, the Inspector General of Police M.A. Adamu announced on October 11 2020 SARS was disbanded. Various main stream media published his announcement as SARS didn’t exist anymore. On 13 October 2020 he informed that SARS will be replaced by a squad called the Special Weapons And Tactics (SWAT) using the Section 18 (10) of the Police Act 2020) and police officers employed under SARS will report to the Nigeria Police Headquarters for debriefing and examination. Protests are going with the new hashtag #EndSWAT. According to locals, it’s only a name change to get rid of international attention to the subject and SARS was never disbanded.

If you are not angry enough , I hope this video helps you #EndPoliceBrutalityinNigeria #EndSWAT pic.twitter.com/GtCy2kec8s

Let us listen how the local people’s lives turned into hell due to SARS:

They’ve done more harm than good since their inception. We haven’t heard or seen any robbery they intercepted or stopped. All they do is to harass citizens of the country and extort them all in the name of yahoo (a slang for online scammers).

You own a laptop, an iPhone, a locked or styled hair, you become a victim automatically.

I’ve had my own fair share of the harassment but since they couldn’t find anything on me and my account balance does not speak my dressing (money no dey akkant), they let me go.

They took me from the bus I boarded and ordered me to drop, told the driver to leave and put me in their mini bus. Asked me series of annoying questions, but I had no option than to answer them.

They picked off another guy as we were going, he was adamant to enter the bus. They beat the living daylight out of him and no one dares interfere all because they possess a weapon of massive destruction. They took the guy’s belongings after he transferred money to their account and told him to leave before allowing me go.

There’s no other thing Nigerians want than to #Endsars. We want not a reform or rebrand. We want them scrapped.

So basically I was beaten cause I took a picture of them. They stopped our bus and they were tasking a guy in the bus to make transfer for them. While they were doing that I took a picture to show send to my friends that I’m still on the road and we were delayed by SARS not knowing one of them saw me and he suddenly wants to search my phone. He went to check my camera and he saw the last picture I took which was of them.

Immediately he saw it he started slapping me. While I was explaining he kept on slapping me telling me I want to post them on social media. Then they told the driver to drop my load that they are going to detain me.

From there I was begging them cause in that situation I can’t even do anything since I was on my knees. They told me to lie on the floor while I was being beaten with a stick in their hands. They hit my head and my back with this stick mehn. And I was wearing a white shirt.
My cloth got dirty.

Before they could release me all the passengers were begging for me. Just because of a picture !!!!

I had body pains for 3 days straight.
One of them even said they could kill me and dispose my body in the bush and nothing will happen.

Bro this thing shocks me like I’m a criminal or what.

So I was coming from OOUTWEEPS hangout where i went to perform for the show.

Going back to my campus they stopped our bus and was actually looking at everyone but I locked my hair so to look like the artist that I am.

They saw me and asked me to come down us some other guys. They said to me “you as you Dey you be criminal. Wey your phone”. My phone was clean and I was clean but it was cause I had an iPhone amongst all of us. I was using iPhone 6 then. Imagine, I was told I can’t leave there and they will take to the station for proper search. I was delaying people in the car so I had to tell them why go to station when I’m clean.

I had to pay them to avoid more embarrassment and stop them from harassing me.

They released me and caught one other guy sha.”

Local people as well as anonymous all over the world have joined the protests everyday. As part of the protests, the source of the leak, an anon brother from Anonymous Nigeria got killed by SARS right after he was able to submit this valuable information to other anons.

Vowed to continue the protests, anonymous has been doing distributal denial of service attacks at the responsible organizations’ websites as well as defaces. As we published this article, the pastebin view count including the SARS leak has reached 5000 views.

Nigerian Presidency – State House website has been taken #Offline in support of the #EndSarsProtests. This is only the beginning.https://t.co/jwUdvQ2vLI | TANGO DOWN pic.twitter.com/DGvBQaGYoy

The protests will go on till this special police force who kill innocents is completely removed and no more lives are lost. Police brutality increases all over the world as the police does not do their duty of protecting citizens but serving their dictator masters who don’t hesitate to take lives who criticise them. Criticism is one of the pillars of the foundations of democratic societies. Nigeria as a dictatorship should receive a heavy international pressure till they respect their citizens’ lives.