How to Protest Safely 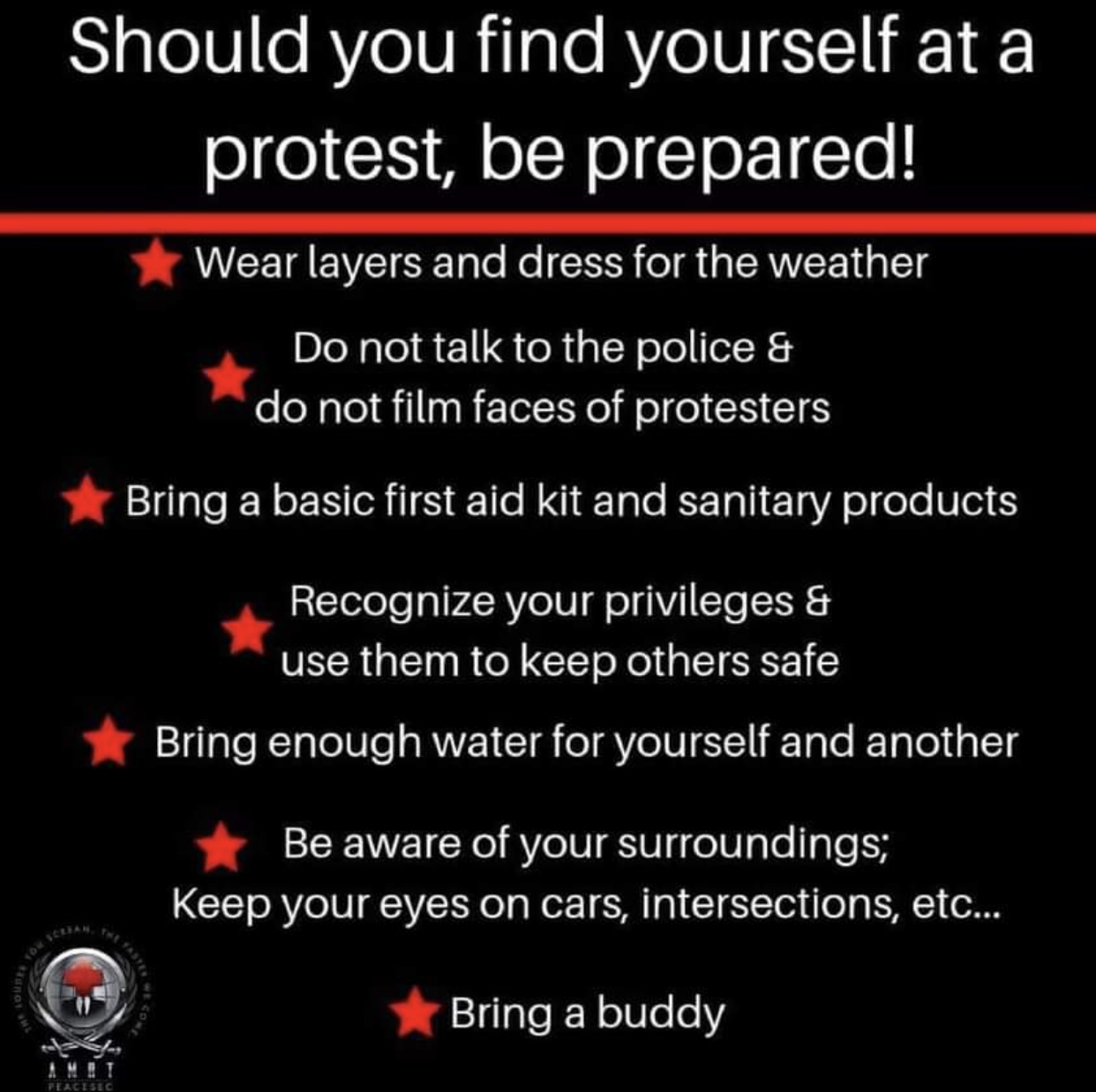 How to protest safely:

If you’re thinking of taking to the streets in protest against…well…everything going on at the moment, make sure you know your rights and how to stay safe.

You might think protesting is just for people who like to wear black hoodies and ‘anonymous’ masks- but actually people from many walks of life and political persuasions get involved in protests. Why? Because taking to the streets is one way that ordinary people can make governments and corporations listen when they’re having a ‘la la la’ moment.

Protesting has won many victories, but it can also be tiring, scary and frustrating. So if you’re planning on taking part in a protest – or starting your own – here’s what you need to know.

AN INSULATED HAT WITHOUT DISTINCTIVE LOGO: To preserve a degree of privacy and prevent photographic invasion. In colder months, insulation will preserve body heat. In every month, insulation will add a layer of protection from less-lethal projectiles.

SHATTERPROOF GOGGLES that can go over glasses if necessary, to protect eyes from crowd control chemicals. Do not wear contacts, as they can trap irritants and you won’t be able to change them if arrested.

HELMET (optional but suggested): If you believe the protest will escalate to violence—either by the police or by unruly protesters—this will add protection from rocks, batons and other possible head injuries.

Don’t wear any makeup or oil/mineral-based moisturizers as they will bind with chemicals. Don’t wear any jewelry, as it can be grabbed or snagged, leading to serious injury.

FUME MASK: Will not protect as well as a full gas mask, but will buy time to escape an area contaminated by crowd control chemicals. Caveat: a mask can make you a target for the police. Carry it and practice putting it on quickly.

LONG SCARF: A multi-purpose accessory that can be used to keep warm, protect identity, support injuries and sprains, and protect from less-lethal projectiles by wrapping around the head.

MULTIPLE LAYERS, EITHER WORN OR PREPARED TO BE WORN: For dealing with changing elements, insulation from impact, and change of identity. Long sleeves to protect from chemicals.

A PACKABLE LIQUID-REPELLENT OUTER LAYER: To resist rain and to keep chemicals away from the skin (cotton will absorb chemicals). Packable so you can throw it over clothes to change identifying colors.

A HEAT RESISTANT GLOVE: to discard gas canisters if they are thrown into the protest as they are extremely hot when discharged.

A CHEAP WATCH that you will be willing to lose if arrested, for properly timestamping documented events such as police brutality, injuries and arrests.

Wash yourself with pH-neutral soap, as detergent soaps will bind with chemicals.

FULL-LENGTH JEANS THAT DON’T REQUIRE A BELT: To protect your legs from scrapes and chemicals; ankles should be cinched or tucked in off to prevent chemicals from entering bottoms. A belt will be taken from you if arrested.

A ZIP-LOCK BAG WITH: ID, necessary keys and enough cash (no credit cards) to get you home if arrested, a letter from your doctor advising on any medical needs and necessary medications

A ZIP-LOCK WITH BANDANA SOAKING IN VINEGAR: This does not offer long-term protection from tear gas, but will afford you the precious seconds needed to get out of the contaminated area if tightly wrapped over nose and mouth. Also will help obscure identity.

NOTEPAD AND PEN: To document events such as police brutality, injuries and arrests.

SMALL FIRST AID KIT WITH latex-free gloves, bandages, antibacterial ointment, a nylon wrap bandage and ibuprofen, without anything that can be considered a weapon such as metal scissors.

ZIP-LOCK WITH AN EXTRA LONG-SLEEVED SHIRT AND JEANS to change into if your clothes become contaminated with crowd control chemicals.

CANOLA OIL & RUBBING ALCOHOL: to be used in that order to wipe clean skin exposed to riot control chemicals.

SPRAY BOTTLE WITH WATER OR MILK: to rinse eyes/nose/mouth to neutralize reaction to chemic

WATER AND ENERGY SNACKS: Sustain yourself!

STURDY BUT COMFORTABLE BOOTS: Should withstand stomping but be light enough to run in. Tuck your laces in to avoid tripping, unlike this guy right here.

What if I get kettled?

‘Kettling’ is a technique used by police to quell protests by surrounding a group or groups of people and keeping them physically stuck in one place, sometimes for hours on end. It can be scary when it happens – one minute you’re doing your thing, the next minute you’re trapped and there’s no way you’ll be getting out for a while.

It’s inconvenient, yes. But it’s unlikely anything bad will happen when you’re in a kettle (unless you need to pee, in which case your drinking bottle is going to come in handy). Try to stay calm and keep your spirits up – make eye contact with the person next to you, maybe start a sing-song. Anything to stop boredom/panic.

Police use tactics like kettling to put people off protesting – but remember, you have a right to be there.

Protesting can be tiring and scary. Make sure you take at least someone you trust, who’ll look after you or form an affinity group. Bring water, warm clothes if it’s cold and snacks – getting kettled for hours can be a hungry business.

Sometimes it can seem like there are more cameras than protesters, but remember some people might not want to end up on Facebook or YouTube. Ask before you snap a fellow protestor. The police can stop you taking a picture if they have reason to suspect you might be involved in terrorism.

Use social media – but carefully

Use Twitter or more secure forms of communication  to keep in touch and find out what’s happening in real time. Protesters usually decide on a hashtag to keep each other updated. Watch out for rumours though – not every tweet is true.

Be aware that the authorities have learned how to use social media too, and that they might use it to bluff or play games. They can also listen in and track you on your mobile phone and get Internet Service Providers (ISPs) to hand over your data. This usually only happens if you’re considered to be an organiser or heavily involved in a particular protest movement. If you’re just along for the ride you’ll probably be left alone, but you should still be careful about what you post on social media.

What happens if the police stop me?

Even if you’re protesting peacefully, if you’re in a public place, the police can stop you and ask what you’re doing there (called a ‘stop and account’). You are not required to give your name or address, but the officer responsible (who must provide a receipt recording the encounter) will probably be unhappy if you don’t co-operate. If they suspect you’re carrying a weapon or engaging in terrorist activity, the police can search you, called a ‘stop and search’. They’re legally allowed to use force if you refuse to be searched.

Stop and account and stop and search are sometimes used by police at demonstrations, especially when letting people out of a kettle. The police also use Forward Intelligence Teams (FIT) to photograph protesters – something people have protested about.

What if things get violent?

Within any protest, there may be people who hold the belief that damage to property is a valid, indeed indispensable, part of making change happen. There is also a risk of violence from the police.

If you don’t want to be involved in violence, you can try to:

– hang back – when you feel people who want a piece of the action pushing forward, don’t follow them.

– avoid side streets and stay out in the open – this will help you avoid getting pinned into any police baton charges or other violence.

– watch out for sudden arrivals of huge amounts of police, especially on horseback – this signals it’s time to try and exit the area if you don’t want to engage further.

What if I get arrested?

No one leaves the house hoping to end the day at a police station, but arrest is possible at any demonstration, especially if the atmosphere is tense. If something happens to you or a friend, track down a legal observer – volunteers who try to ensure arrested protesters are treated correctly – and try to take the badge number of the officers involved in the arrest.

Write the legal support number on your arm, bottom of your footwear or both

Most big protests will have a legal support number to call if you’re arrested. It’s sensible to write this number on your arm (so you have it even if your bag and phone are confiscated). Legal support will help arrange a solicitor for you and advise you about the legal process.