Europe in Chaos – the Pandemic of Leaders Wrong Response 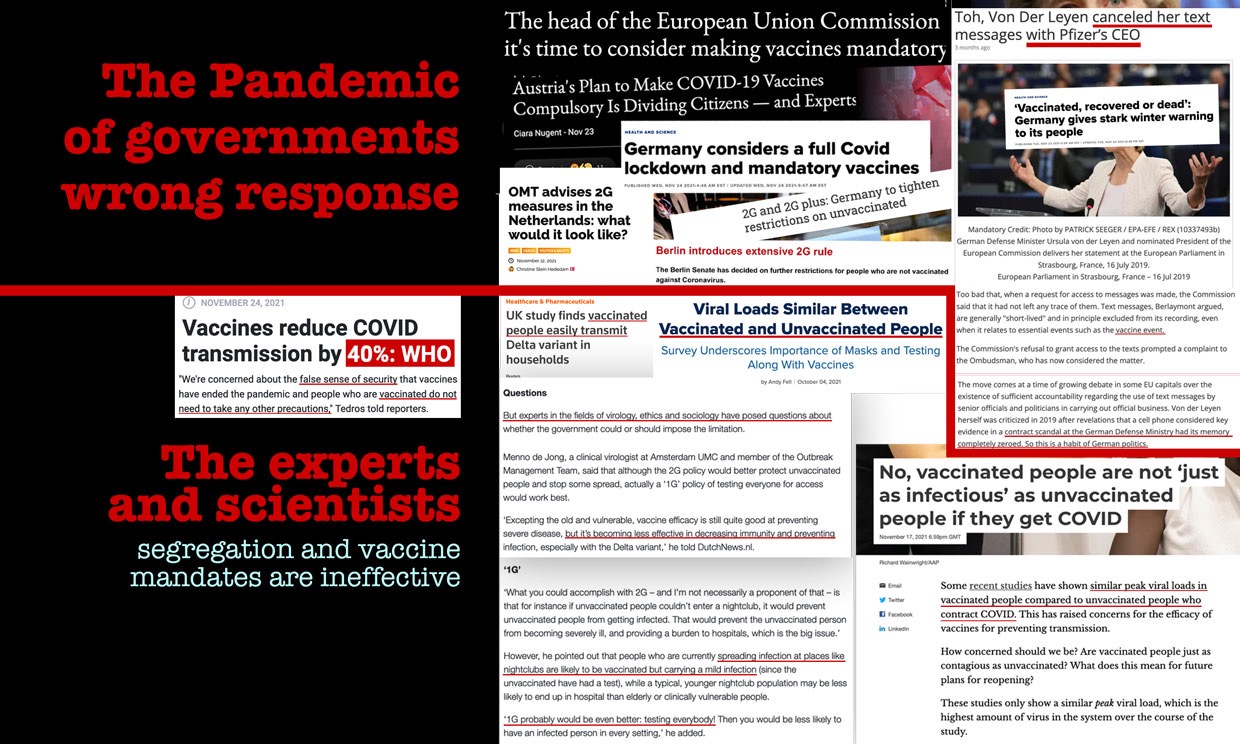 The conservative governments with their “top to bottom silos”, are shouting threats and punishments to the citizens. Politicians are people, such as the citizens, it is obscure for them to think, they would be more intelligent than the people who elected them.

“Fear of failure and consequences.” Europe is living today in consequences of the past failures. The people in power are too weak to admit and pointing a finger on unvaccinated people. What the experts and scientist say, makes this claim baseless. This kind of behaviour leads only to bigger failure, inevitably establishing a new social class order in Europe. None of this is ending the pandemic, none of it, is saving any one’s political career. The establishment is doomed to go down unless it changes its approach rapidly.”

Tell the teenagers not to party or smoke weed, one can be sure they will do the opposite. In pandemic like COVID, demanding people to get vaccinated, instead of taking more intelligent approach is inexcusable. Like with any disease, the first question the patient asks is “What can you do to help me to get better?”. This approach has been forgotten since the beginning. It is normal for the doctors to explain different approaches and options, including discussing side effects of different treatments.

With Pandemic management it shouldn’t be different, in regards to vaccines. Many of us have had the discussion with our doctors about them. There have been overwhelming differing answers. From “I don’t discuss about them, I follow orders of the national health institution”, to “It is your choice, think about it”. What has been missing with both responses is the essential information, such as, “if you choose to take it, vaccine(s) have possibly 40% preventative effect.” According to WHO November 2021 statement) “It is not 100% sure, if they will protect you from getting sick, it is advisable to continue wearing mask and practise social distancing to protect yourself and others”. Or waiting for the question: “How can I protect myself from the disease”, instead of forcing it.

The leaders are demanding mandating vaccination, that is 40% preventative, opening restaurants, bars, night clubs and abolishing all the other hygiene recommendations. This was the start of the 4th wave, they created the myth, that if people took the vaccine they were safe. Few months after, the fourth wave is in full force. Truth about break through infections. They are not rare at all, there are tens, hundreds of them each day. Previously recovered, then vaccinated people are getting sick with COVID. Not only in asymptomatic form, but really getting sick. These people are feeling cheated, coming up with questions, “Why I am this sick, when I did as the government told me to do?”.

It’s a good question, the final question is, how can they demand making it mandatory? Pfizer has its two year follow up study still running, examining the possible long-term effects its vaccine has to persons immune system and organs. It is illegal mandate a nation, to take part of compulsory medical experiment, it should be voluntary based for those who chose to get 40% protection for few months.

Leaders and governments, with their health departments are lacking emotional intelligence and the ability to listen to the advice of the experts. They are too busy to be seen as popular, so much, that they don’t hesitate to destroy the internal peace of the nation. Still today, after facts are known, they allow vaccinated people to enter places, while denying access to those, who decided to wait until they are assured enough of vaccine safety.

It’s just that. It means the same, the person isn’t infected with the virus. The states are restricting unvaccinated people accessing services, in grounds that they haven’t agreed to take the vaccine, instead of testing everyone. Without data collective use of QR-code, that alone doesn’t prove, person isn’t infected.

We are speaking about “obedience” related restrictions, not protecting the vulnerable groups.
It is evidence based, that people who are vaccinated are infecting as many people than unvaccinated, if they have caught the virus. There is no evidence-based data available, that restricting unvaccinated people is effective, or even necessary measure by anyone. Except the people in power, wanting blind obedience to their orders.

No person can be forced to take a medicine/vaccine that is still under review and research. As with any new medicine, personal consent is required and in the event of serious side effects, or permanent disability the pharmaceutical company is liable, to pay out damages and compensation. If the people in power are so convinced on vaccine safety, why haven’t they signed a form transferring the liability on themselves? All the current vaccine pharmaceuticals, have asked to sign a liability waver as a part of the purchase order. It’s a clear statement, that they don’t know, what the vaccine will do in long term, neither short term.

QR-codes, 2G/VR rules are a punishment for “Disobedience” according to the Government. In reality it is a human right to take any medical decision regarding ones’ own body. Vaccine mandates are unconstitutional and serious violation on human rights.

They haven’t been proven to prevent infection. Currently unvaccinated are not “anti-vaxxers”, fascists or other terrorist groups, but ordinary citizens, including medical health care professionals, firefighters, police officers and many other professional groups, who simply want to preserve their rights to freedom of taking decisions over their own bodies.

The governments have launched a smear/fear campaign, categorizing protests and opposition as “anti-vaxxers”, in these events there is a massive support among vaccinated people too, to oppose Governments QR-code discrimination, and social class classification, to place everyone in opposition under one label. In an attempt to justifying their dehumanizing, coercive and unjust decisions and actions.

They have succeeded in some instances, but everyone who isn’t living in self-imposed denial is realizing this. Who can blame them? Everyone hopes the pandemic will end soon, the error is to give false hopes, instead of solid facts, delivered with honesty and transparently. No one knows today, at this stage what works and what doesn’t. Discrimination has proven to be the wrong approach, while the unvaccinated sit at home under unfair restrictions the cases are soaring. Last year no one was vaccinated, yet and the cases where half what they are today.

What has worked so far are: FFP masks are offering over 50% protection against infection if worn properly; Testing; Social distancing; Ventilation (currently non-existent in many countries, in public transports, restaurants, venues, doctors offices, stores and offices); and Washing hands

Regardless if people are vaccinated or not, these least restrictive measures can be taken by everyone to prevent the spread. Not because government says so, but using your own common sense, Corona is an air-born virus. Do it for your own and others sake.

EU Commission introduced a travel document with a QR code in June 2021. Aiming to open up countries and protect people from transmitting the virus. Vaccinated people using QR code, don’t need to take a test, or engage in other hygiene precautions. By the time the Green Pass was passed by the EU Parliament, Israel, the most vaccinated country in the World, already struggled under new wave. It was a public knowledge that the vaccine didn’t protect the people from getting infected with the virus.

In EU, head of states ignored the facts and started to promote coercion and discrimination of the people who refused to take the vaccine. They instilled hate inside the nations, using travel document “QR code” as a tool, they gather information of individuals, tracing each step with the aid of a scanned QR code. Five months has passed since the first country started to use the GreenPass QR code to discriminate, it didn’t prevented the surge of the 4th wave. The European Parliament didn’t approve the original use of a code in this form.

We cannot vaccinate ourselves out of the Pandemic, but we can get over it as a community

At the present there is no vaccine that prevents infection. Austria who first voted mandating vaccines by February 2022, followed by Germany who has engaged on discussion mandating vaccine and Ursula Von der Leyen, who calls EU wide mandatory vaccination. All of them wish to mandate a vaccine today, which have proven to be ineffective, to prevent completely infections against the variants, hopefully against severe disease, but this isn’t always the case. The disinformation about vaccine effectiveness, its possible side effects are unproportioned and inaccurately reported by the mainstream media.

Currently there are two new protein based under EMA review, both using old, well known technology, curiously the approval of them takes a very long time, comparing the speed record approval they did with Pfizer, Moderna, AZ and Johnson & Johnson vaccines, all of them produced with new technology.

It is recommended people would do more research, reading known research institutions experts reports and following WHO recommendations. Mainstream media publishes Governments propaganda, based on fear and coercion and therefore it isn’t accurate or reliable information source. If you still do read them, one piece of good advice for everyone, think and don’t believe everything that’s written. Critical thinking is essential when taking in information and deciding what to believe. Question everything and use a common sense, read medical journals, not the MSM and Big Pharma press releases.

If anyone wants to overcome hesitancy to take a new medicine/vaccine, all the research data should be made publicly available. Unredacted. Truth, honesty and transparency are more powerful than threats and secrecy. Statements such as “benefits outweigh the risks,” “not known serious side-effects have been reported” are not increasing public confidence, the contrary. Many medicinal products are having long term side effects. Public has the right to know everything and make up their own minds to take the risk or not. Not the elected Governments.

Everyone is in the same boat, regardless what their vaccination status is. The World needs unity, not division, humility and humanity to come out from this together.

Without compromising human rights and right to self-determination. Without Government ordering taking vaccine or losing a job, restricting freedom of movement and categorizing people. These measures are causing a civil uprising, that is justifiable, as the government has no legal right to turn democracy to authoritarian tyranny!

In the meantime, the Western part of the world, the US, UK and the EU countries are sitting on vaccine patents, without releasing them to the rest of the world. Throwing away expired vaccines, pushing people to take them to avoid waste and covering up their greed, public funds spending and selfish behavior, widely contradicting themselves and the messages they give out. They are not thinking of us, but the pharma profits and what they have to gain from them.

Note to the readers:

I am not an anti-vaxxer, fascist, conspiracy theorist or a terrorist and my own vaccination status is protected by human right to medical privacy. Not everyone advocating for human right to free choice should be placed to one box, this is what the governments are doing and succeeding! Don’t live in denial, open your mind and be open to others opinion, they threaten yours only when you are yourself in doubt.

Opinions expressed are solely my own and do not express the views or opinions of others. They are not meant to be used as a guidance. Everyone must make up their own decisions and conclusions, without interference or coercion.