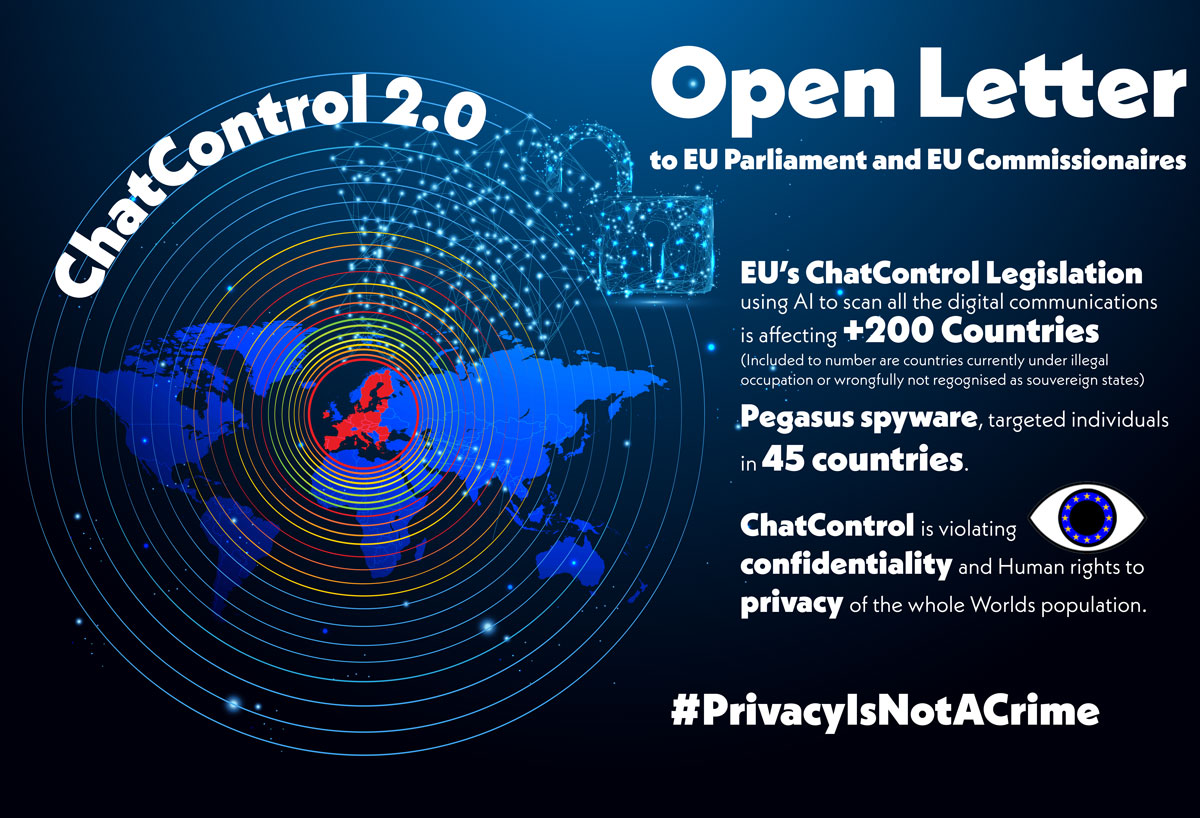 ChatControl 2.0 will be introduced in March 2022. If adopted, it will place the whole European Union area under mass-surveillance. Citizens must act NOW! If you believe that privacy and confidentiality is a Human right, please copy the letter below and email it to recipients below. CC yourself in the email, to prove you have opposed the ChatControl legislation. Alternatively you can print it out and collect signatures.

One thing is sure, as long there is oppression there will be resistance!

Members of the European Parliament

Executive Vice President for a Europe for the Digital Age, Margrethe Vestager

From: Citizens of the EU 27 Member states and
concerned citizen worldwide

Dear Members of the European Parliament and European Commissionaires,

We, the citizens of Europe are opposed to the recent trend of introducing and approving legislation’s that are in direct conflict and violation of our fundamental human rights.

We acknowledge that the members of the EU parliament were elected by the citizens; unlike the legislators who remain unelected public servants, placing them in a questionable position, without any mandate from us to make legislation’s that are violating our rights.

You, the members of parliament have a direct responsibility to represent the citizens, placing any possible political interest aside.

We the undersigned, ask you to respect your duty towards the people and stop automatically voting ‘yes’ for legislation’s that you know are morally and ethically against our human rights and against our will.

Chat Control legislation will allow indiscriminate scanning of all digital communication of over 500 million people inside the European Union.

Abolishing end-to-end encryption with the proposal of installing backdoor to electronic devices, giving authorities access to all our data, confidential medical files, legal documents, contracts and other agreements, including private letters, is opening all our personal devices to attacks and abuse.

The press, investigative journalists who rely on sources, will be unable to keep these contacts confidential, affecting the freedom of the press, and placing both journalists and their sources lives and freedoms at great risk.

The Chat Control legislation will give a green-light to mass surveillance of over 500 million people in the EU. The worldwide impact will be devastating because the communication apps we use are global companies, all the data will be decrypted and analyzed. Incoming and outgoing communications in EU 27 member states area.

The European Parliament MP’s must vote AGAINST Chat Control and Chat Control 2.0 legislation that would make it’s implementation mandatory, during the EPlenary vote in 2022.

A poll showed that 72% of EU citizens are against Chat Control legislation, these are the people that vote for EU MP’s to represent their voice in the European Parliament.

On a National level the Governments of 27 member states must not comply with a chat control legislation, should it get approved in European Parliament EPlenary.

We the citizens, the majority who are opposing this legislation, our voices must be heard and our opinion respected.

In future, citizens inside the European Union, should have a direct vote for any legislation, introduced by the EU Commission, which is directly affecting and/or endangering our rights to privacy, freedom of speech and expression, or governments applying any form of censorship that interferes with our rights to access information.

We, the European Citizens, are defending our right to privacy and request that all parties involved act in accordance to our wishes.