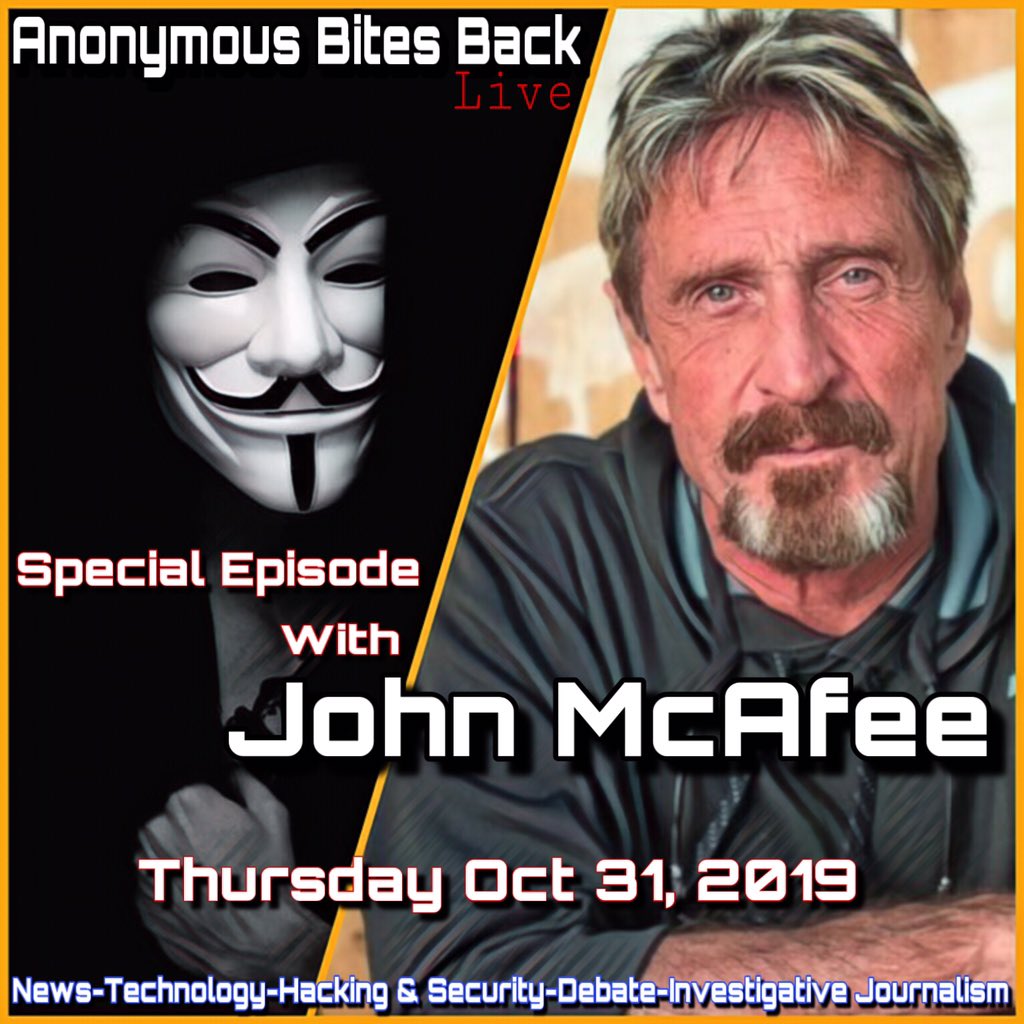 Our favorite Anonymous podcast Anonymous Bites Back has been paving the road for a few years now. Being one of the voices of the Anonymous collective on air, the team has attracted lots of attention from “high profile” guests. With former guests such as Barrett Brown, Lauri Love, Robbie Martin and Steve Grant, the Anonymous live show delivered quality content to over 30 different websites on the internet. And this time it is going to be shocking.

Because now they are announcing another amazing guest, John McAfee. The former anti virus mogul, now turned cryptocurrency enthousiast and rebel for a cause, is planned to appear Thursday, October 21, 2019. Some on the panel are really into cryptocurrency but this is isn’t the only reason to ask him to come on air. Because John McAfee is also speaking out about corruption regarding the financial system in the USA. Next to that he focusses on corruption within US politics. And this is where Anonymous Bites Back comes in, because as you are probably aware, journalists and whistleblowers like Chelsea Manning and Julian Assange are currently incarcerated for speaking out as well.

But John McAfee so far has not been silenced, and that is why Anonymous Bites Back wants to talk to him. Because he likely can provide a unique insight on how to deal with a state that is trying to take your voice away. You can talk to him as well, because your questions will be asked on air if you submit them. You can do this by simply joining the chats below the streams and saying whatever you want to say. The Anonymous Bites Back team will then forward your questions, and if John McAfee feels like it, he will answer them.

Anonymous Bites Back will be broadcasting a little earlier than usual. Make sure you tune into the broadcast in time so you won’t miss a thing.

The second it will go live it will be updated on Twitter: @ABBLiveShow

The main stream that will go live is Periscope: Anonymous Bites Back on Periscope

As an alternative we recommend VK: Anonymous Bites Back on VK

All the options above provide you means to ask questions, either by Tweeting, or by entering in the chats. The Anonymous Bites Back team will read all the messages, uncensored.