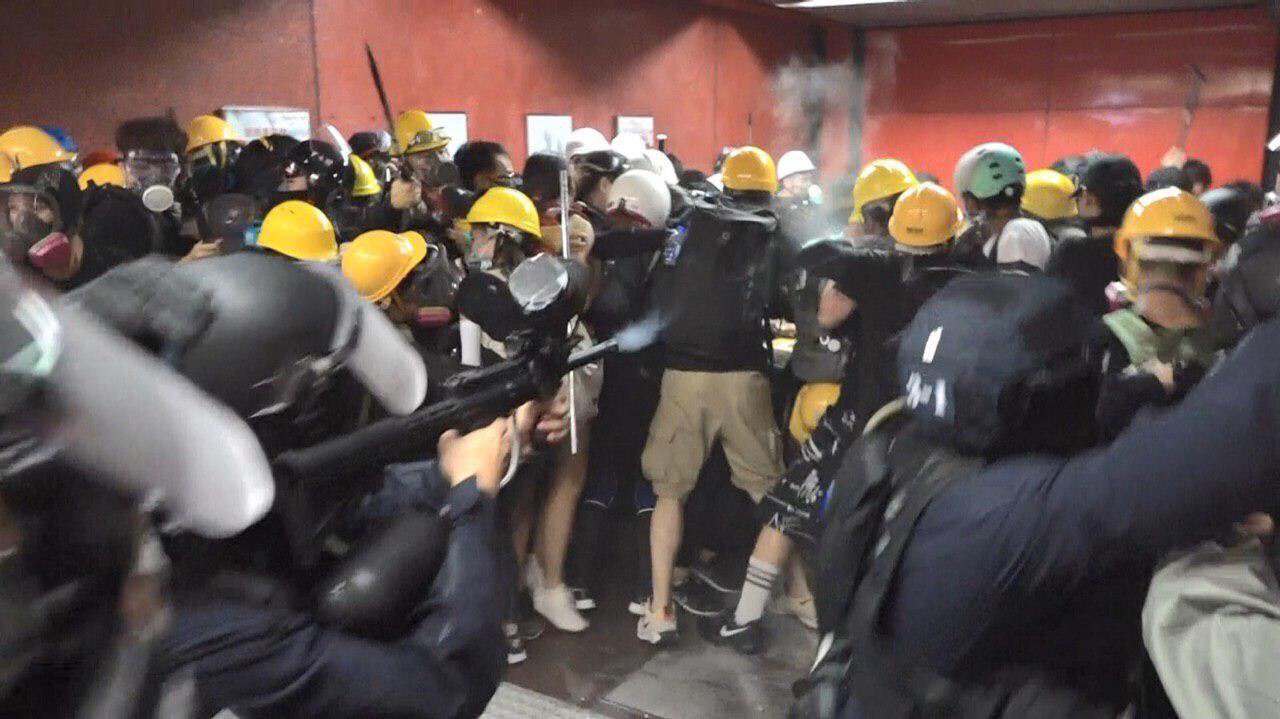 Since June 9th, we have been witnessing Hong Kong proving itself a new police state.  This post and the next one would evident such claim, with this focusing on police brutality in the protests, and the next one focusing on the ridiculous power of the police force, censorship and surveillance under the regime.

Police states are commonly known as states ruled by authoritarian regimes, where police force or even military power would be utilised in order to maintain the state’s regime.  Under totalitarianism and oppressive governance, violent and arbitrary means are often observed, as police would hardly be subjected to punishment.

On June 9th this year, protesters have decided to come back to the streets for the first time for a large scale peaceful protest, after the failure of Umbrella Movement in 2014.  In opposition of the extradition bill, approximately 1 Million citizens of the total population of 7 Millions have gathered in Hong Kong’s Government Headquarters in demand for the withdrawal of the bill.  However despite the significant voice of opposition, the government have decided to oppress instead of to listen.  Chief executive Carrie Lam announced on the same day that the second reading of the bill would not be postponed nor would the bill be withdrawn.  And the demonstration had ended in police spraying pepper spray and beating up protesters with their batons towards the end of the day.

In response to the regime’s stubborn decision, along with a protester Leung’s suicide with a statement that his death was for the protest, over one-forth of the population, approximately 2 Millions rallied the very next Sunday on the 16th of June.  The peaceful and legal demonstration involving citizens of different ages from all walks of life was returned by the onslaught of 150 tear gas shots and numerous shots of rubber bullets and bean bag rounds.  This day marked the start of the endless police brutality.

After the day, protests have been going on and so was the oppression.  Close downs of the Mass Transit Railway (MTR) stations closest to the locations of protests to minimise the population reaching the location, and shooting tear gas without warning had become commonplace to the Hongkongese.

On the 21st of July, police were suspected to be working with the triad gangster in attack of civilians in Yuen Long.  The “people in white shirts”, later found triad members, had brutally beaten passengers in the station, especially targeting those in black shirts (given that black shirt was the dress-code of the protest on that day).  Some called the emergency number, yet police only arrived 39 minutes later, after the triad have just left.  Very soon after the police have left, triad members returned to the station to continue with the attack.  The incident was an important evidence that Hong Kong functions as a police state.  Because later the night, former legislative council member Junius Ho was found congratulating triad members involved in the attack.  It is clear that the attack was no ordinary, but arranged by politicians with political intentions.

On the 11th of August, police fired tear gas indoor in a MTR station in residential area, leaving civilians in the station no chose but to suffer in the toxic smoke.  On the same day, a girl was shot in the eye and has to suffer the loss of vision permanently.  Two weeks later, on the 25th, water canons were deployed for the first time during protest and live round was fired for the very first time.  Only 6 days later, on the 31st, the force stormed into Prince Edward station and have seriously injured citizens, even leaving numerous unconscious.  Police then have closed the station for over 48 hours, to erase traces of their violence in order to dodge responsibilities of the violence.  That was also the day where people started to have gone “missing”, and later found “committing suicide”.  Which we will be going into in the next post.

Since October, police started firing live-rounds aiming to kill.  On the 1st of October, where 1,667 tear gas rounds were shot, a secondary form 5 student was shot through his chest by a live-round.  The live-round that was shot through his lungs was only 3 cm away from the heart.  The other severe injury by live-round happened on the 11th of November, where the city-scaled strike was held.  Early morning in a residential area, the 21-year-old was shot in a ridiculously close distance within 1 meter, despite being entirely unarmed (footage link below).  And later November there was the siege in the universities where students were confined and attacked with nowhere to hide from the force.

The police force have fired at least 16,000 tear gas rounds, 10,000 rubber bullets, 19 live-rounds in less than 6 months in 2019, including a maximum of over 2,000 tear gas rounds in a day.  In comparison to the 87 shots of tear gas rounds in 2014, the violence observed in within the period of time had apparently crossed the line of being ethical.  Other violent and unjustified acts like shooting unarmed civilians in extremely close distance and so on could not sound more ridiculous.  However due to the power given by the regime, until today none in the police force was held accountable for all the violation of human rights and mistreatment that has been circulating and condemned around the globe.  In the next post, we shall continue revealing evidence that Hong Kong a police state.

For explicit documentation of the incidents mentioned and more, please visit:
https://www.amnesty.org/en/latest/news/2019/10/timeline-of-the-2019-hong-kong-protests/