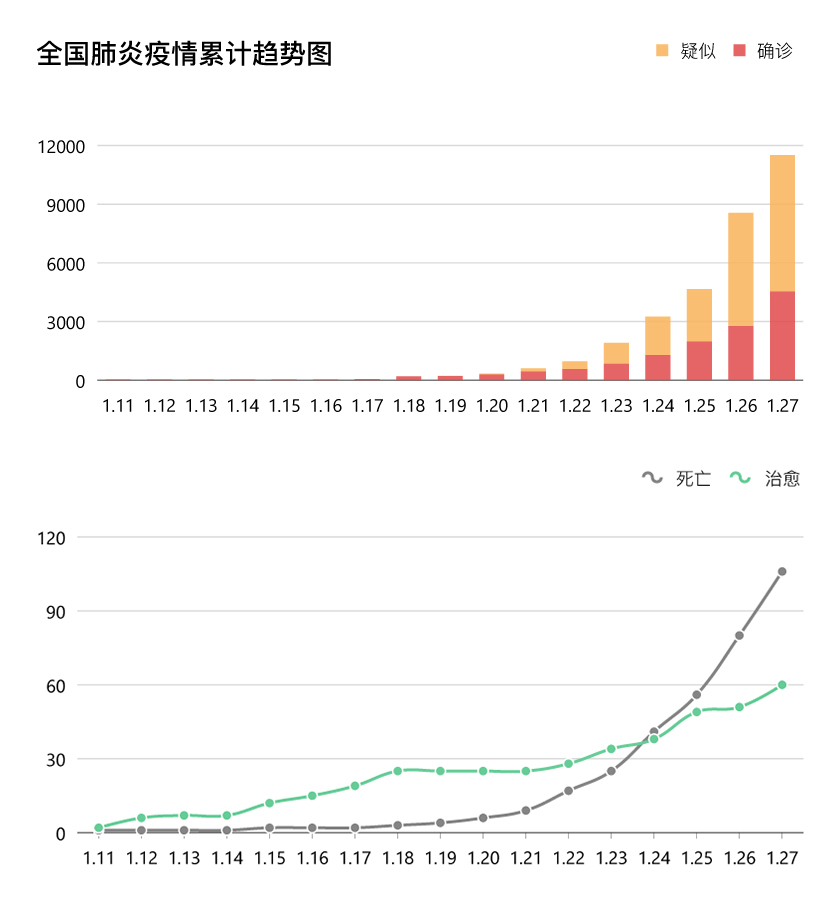 Graph of Statistics in China, for bar chart red is diagnosed cases and orange is suspected cases, on line chart green is recovered cases and grey line being death cases.

As of 29 Jan, total number of diagnosed cases spiked to 6062, death tolls increased to 132. Hubei Province, which has Wuhan as capital, recorded 100 deaths. Deaths are each reported from Henan, Peking, Shanghai, Hainan, Hebei and Heilongjiang. Until now, Xizang, or Tibet, is the only province without reported cases.

For cases outside China, no new areas are reported with diagnosed cases. Whereas, both new cases that occurred in Japan and Germany marks first human-to-human transmission within the country, opposing to most cases where the person arrives from China infected with the virus.

Following is the number of total and new diagnosed cases by the respective countries:

Team in Department of Microbiology, University of Hong Kong(HKU), is developing an attenuated live vaccine using the virus strain from the first imported case of Hong Kong. Chair of Infectious Disease in the Department, Professor Yuen Kwok-Yung reveals that currently it is waiting for animal trials and hopes to start clinical trials within a year.

The vaccine is based on a nasal spray influenza vaccine, patented by the HKU research team in America, which is invented by the same team in the past 3 years. It is modified by replacing the pneumonia causing gene NS1 in flu viruses with the surface antigen producing gene in the Wuhan coronavirus, making a combined vaccine for flu with surface antigens H1 and N1, and Wuhan coronavirus.

Case in Beijing tested positive with virus without any symptoms

National Health Department of China announced their findings that they have found one close contact of diagnosed patients gave positive results even the person did not show any symptoms of being ill. With more people spreading from infected areas into different locations, officials fear that more will be infected but showing minimal symptoms including light fevers and occasional coughs and tiredness. This is bound to increase efforts on tracking transmissions, yet the light illness also limits transmission potential as the virus is mainly spread by droplets released by patients coughing or sneezing.

Since 27/01/2020, multiple counties in China executed plans for giving monetary award ranging about RMB1000~2000(US$145-290) based on the county, for every unregistered case of person, or person with high contact with, whom came from or went to Wuhan since 14th Jan.

Workers across the medical sector in Hong Kong joins worker’s union “Hospital Authority Employees Alliance”(HAEA) in a membership sign-up booth, a worker’s union organized in the heat of the Pro-democracy Movement, to pressurize the Hong Kong Government to respond to their “Five demands” by organizing mass strikes starting from 3rd Feb. According to their official telegram channel, out of the total 79k workers in Hospital Authority, over 15k has joined their union.

The five demands given by the HAEA are: 1. Completely close borders between HK and China; 2. Call for all HK citizens to wear masks; 3. Provide sufficient isolation wards, temporary suspend non-emergency services; 4. Vigorous follow-up on cases where patients attempt to escape, ensure safety of workplaces; and 5. Provide sufficient provisions for staff to work in isolation wards.

Germany is planning to evacuate about 90 registered Germans in the Wuhan region with A310 passenger jets and medical Airbuses equipped with intensive care units from the air force unit by weekend, a decision made public after a line of countries revealed their evacuation plans for their own nationals.