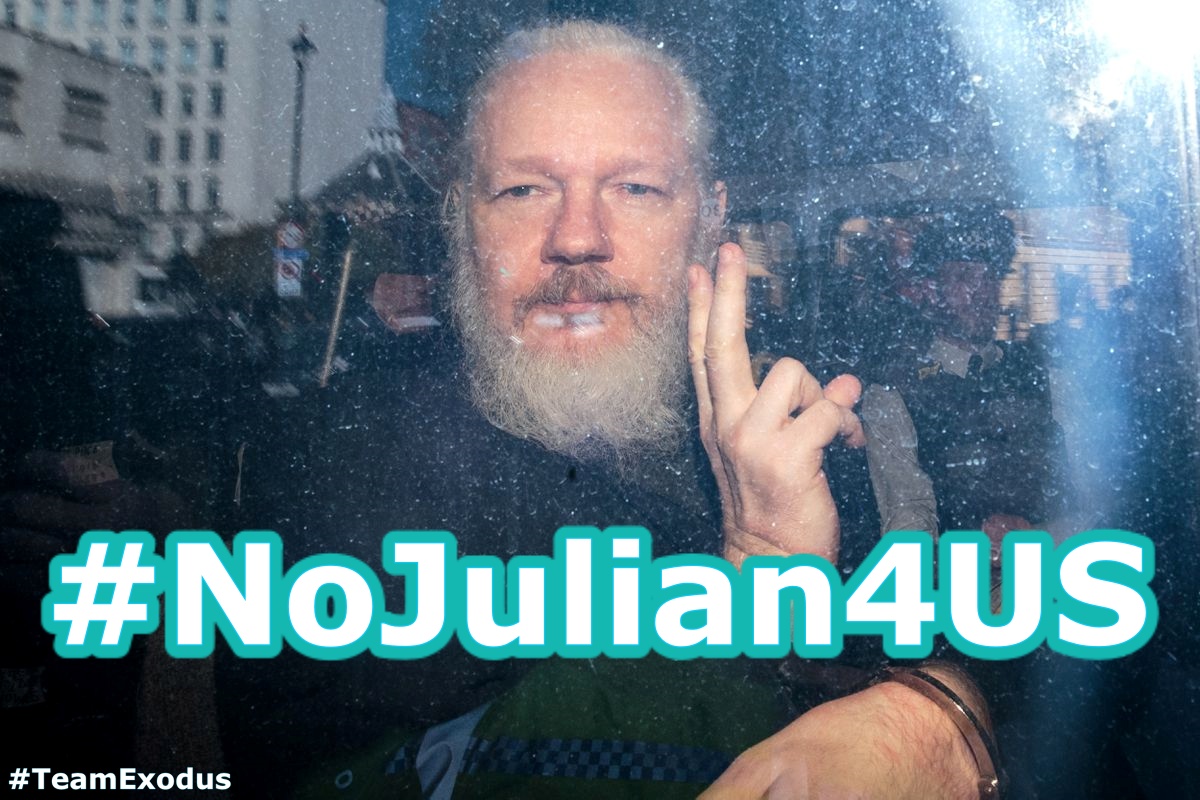 The idea behind a small compact Tweetsheets to be released in phases is to ensure that Twitter does not lock accounts for what they call “suspicious behavior” or “automated behavior”.

This sheet can be copied and pasted onto any format for repubplication. We implore all to repost this sheet on thier own website and add their own pictures or words to Tweet. Please share this sheet far and wide

“Former Foreign Minister Sigmar Gabriel is among 130 public figures urging the UK to follow the advice of the UN special rapporteur on torture to release Julian Assange on medical grounds.” #NoJulian4US https://www.dw.com/en/130-prominent-germans-appeal-for-julian-assanges-release/av-52278739

Julian Assange’s detention “sets a dangerous precedent for journalists”, according to politicians from the Council of Europe’s parliamentary arm, who voted to oppose the WikiLeaks founder’s extradition to the US. #NoJulian4US https://www.theguardian.com/media/2020/jan/28/julian-assange-detention-sets-dangerous-precedent-for-journalists

A US grand jury has indicted #JulianAssange on 18 charges, 17 of which fall under the Espionage Act, he is charged with conspiracy to receive, obtain, disclose classified diplomatic & military documents. They are extraditing Assange for the crime of journalism #NoJulian4US

“We have now learned from submissions and affidavits presented by the United States to the court that they do not consider foreign nationals to have a first amendment protection.” – Kristinn Hrafnsson #NoJulian4US https://www.counterpunch.org/2020/01/28/split-hearings-the-assange-extradition-case-drags-on/

“The extradition of an Australian or Italian journalist by the US would just as easily justify the same action by Saudi Arabia and Russia… an extra-territorial extension of US power to punish the world’s scribblers, bloggers and publishers.” #NoJulian4US https://www.counterpunch.org/2020/01/28/split-hearings-the-assange-extradition-case-drags-on/

Assange has already served a 50-week prison sentence in Britain for jumping bail. A rape investigation launched against him in Sweden has been dropped, so he would likely be freed from prison if extradition is denied. If the extradition is granted journalism dies #NoJulian4US

Assange has been charged with 17 counts of espionage for publishing the government’s documents exposing US war crimes in Iraq and Afghanistan and torture in Guantanamo Bay. Journalism is not espionage. #NoJulian4US https://dailytimes.com.pk/542858/why-assange-extradition-case-matters-to-our-democracy/

“Assange, through his work with WikiLeaks, not only informed the public about America’s troubled beginning but also provided a mechanism for people to redeem its unaccounted past.” We must stand up against the extradition of Julian Assange #NoJulian4US https://original.antiwar.com/nozomi_hayase/2020/01/19/why-assange-extradition-case-matters-to-our-democracy/

“While being held in solitary confinement in a maximum high security prison in London, Assange was awarded the 2019 Dignity Prize for his support of Catalan people’s struggle for independence.” #NoJulian4US https://original.antiwar.com/nozomi_hayase/2020/01/19/why-assange-extradition-case-matters-to-our-democracy/

“With the indictment of Julian Assange and the imprisonment of whistleblower Chelsea Manning, we are seeing the US government’s blatant attack on the First Amendment. This assault now is officially acknowledged by a US federal court” #NoJulian4US https://original.antiwar.com/nozomi_hayase/2019/08/12/the-prosecution-of-julian-assange-affects-us-all/

“I have never seen a group of democratic States ganging up to deliberately isolate, demonize & abuse a single individual for such a long time & with so little regard for human dignity & the rule of law” – UN Rapporteur on Torture Nils Melzer #NoJulian4US https://original.antiwar.com/nozomi_hayase/2019/11/20/the-prosecution-of-julian-assange-calls-for-the-publics-defense-of-free-speech/

“It is a rifle shot to steer clear of a case that would worry the average journalist that they could be prosecuted over stories that make it into The NYT, The Washington Post, and Politico all the time” – Law Professor Ashley Deeks #NoJulian4US https://www.politico.eu/article/julian-assange-extradition-dispute-over-political-crimes-looms/

UN torture expert says he has been left “genuinely outraged” by the prosecution of WikiLeaks founder Julian Assange, speakers at an event at London’s Frontline Cub this week warned the case should be considered an “attack on all journalists.” #NoJulian4US https://izodnews.com/2020/02/08/u-n-torture-expert-outraged-by-wikileaks-founder-assanges-extradition-case-what-about-the-war-crimes/

“The judiciary in the UK has proven either unwilling or unable to guarantee due process,” Melzer stated Assange has symptoms that were consistent with psychological torture. “I think this case is in the hands of the public.” – @NilsMelzer #NoJulian4US https://izodnews.com/2020/02/08/u-n-torture-expert-outraged-by-wikileaks-founder-assanges-extradition-case-what-about-the-war-crimes/

“Imprisoned WikiLeaks publisher Julian Assange has been awarded Consortium News‘ 2020 Gary Webb Freedom of the Press Award for courage in the face of an unprecedented attack on press freedom.” #NoJulian4US https://consortiumnews.com/2020/02/10/julian-assange-wins-2020-gary-webb-freedom-of-the-press-award/

German TV Exposes the Lies That Entrapped Julian Assange,a major German TV network has aired an interview with the UN rapporteur on torture that reveals the invention of the Swedish “rape” case against Julian Assange. #NoJulian4US https://original.antiwar.com/mcgovern/2020/02/07/german-tv-exposes-the-lies-that-entrapped-julian-assange/

Assange is not an American citizen. WikiLeaks, is not a U.S.-based publication. The extradition of Assange would mean that international journalist do not have freedom of speech and it will end journalistic investigations that expose power. #NoJulian4US https://www.commondreams.org/views/2020/02/10/what-happening-assange-will-happen-rest-us

Assange is being held in the notorious high-security HM Prison Belmarsh. He has spent much of his time in isolation, he’s heavily sedated & has been denied medical treatment. His lawyers say they are routinely denied access to him. #NoJulian4US https://www.commondreams.org/views/2020/02/10/what-happening-assange-will-happen-rest-us

“He had hard evidence of US war crimes now the country guilty of the war crimes is trying to get a hold of him. For the Australian government to go along with this is unconscionable. The whole thing is mad from start to finish.” – @WilkieMP #NoJulian4Us https://www.smh.com.au/politics/federal/australian-mps-to-meet-julian-assange-in-london-20200214-p540yu.html

“One of the largest petitions ever tabled in Australia’s parliament—now signed by 280,000 people—was presented in the House of Representatives, calling for freedom for @WikiLeaks founder Julian Assange.” Hands off Assange! #NoJulian4US #FreeAssange https://www.wsws.org/en/articles/2020/02/13/parl-f13.html

Spanish security firm UC Global recorded Assange 24/7 & gave this video to the CIA. “That firm was contracted by Ecuador to protect the embassy to protect Assange to protect us from his persecutors.” – Former Ecuadorian diplomat Fidel Narvaez #NoJulian4US https://thegrayzone.com/2019/10/10/cia-spied-on-julian-assange-in-ecuadorian-embassy/

“There is an effort to distract the attention from the main important issues, which is he is the one persecuted; he is the one spied on; he is the one who they want in jail for publishing truthful information about war crimes.” – Fidel Narvaez #NoJulian4US https://thegrayzone.com/2019/10/10/cia-spied-on-julian-assange-in-ecuadorian-embassy/

The first Right our founding fathers wrote down was freedom of speech, yet today we have become a country that uses its own powerful influences to silence not only American citizens but citizens of other countries as well. Stand up against the extradition of Assange! #NoJulian4US

Wikileaks inspired revolutions that toppled governments without firing a single bullet, @Wikileaks did it by spreading information and knowledge which terrified global powers. Now Assange is facing extradition to the US for exposing #US war crimes in #Iraq. #NoJulian4US

US fighter pilots shot 30 mm cannons down on civilians & journalist from Apache helicopter in Iraq, and those same soldiers then fired a missile into a van driven by a dad taking his kids to school. Wikileaks exposed these war crimes, that is journalism not espionage #Nojulian4US

Julian Assange and Chelsea Manning did not fire those 30 mm cannons and kill civilians and journalist, the United States government did. If you condemn Julian and Chelsea then you condone the war crimes they sacrificed their liberty to expose. #NoJulian4US #FreeChelseaManning

Julian Assange exposed the media establishment as frauds and exposed our entire political system for feigning democracy. That is why both sides of the political spectrum want to see Julian burned at the stake, extradited to the US and silenced. We must stand up #NoJulian4US