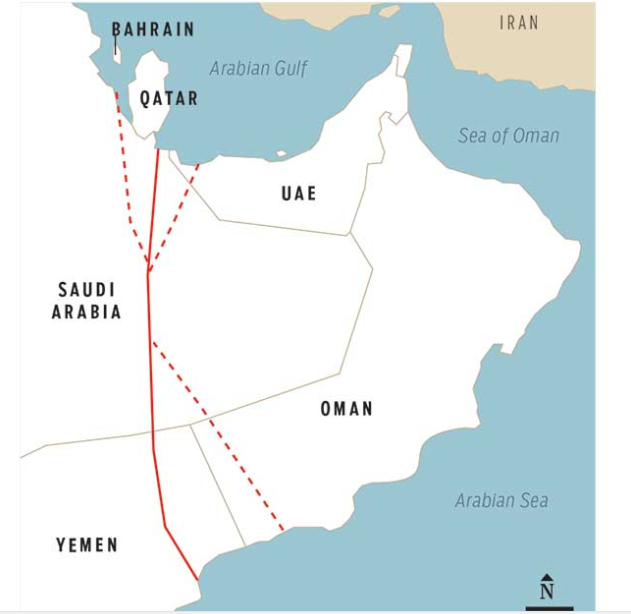 In 2015 Saudi Arabia intervened in the civil war in Yemen and launched Operation Decisive Storm. Five years later, the Houthis are still a strong fighting force in Yemen. What has this war accomplished since 2015? The Houthis still control large sections of Yemen and have the support of the Yemeni people. Yemen is 75% Sunni, yet the people are supporting a Shiite movement within their country. Why? Because in the last five years, the Saudi-led coalition’s intervention in Yemen has killed over 100,000 people.

Saudi Arabia deployed over 150,000 troops to Yemen and 100 warplanes to a country that doesn’t have any air defenses. That is just Saudi Arabia’s contribution to the Arab Coalition’s efforts in Yemen. It does not include the fighter jets or ground forces from Egypt, Morocco, Jordan, Sudan, the United Arab Emirates, Kuwait, Qatar, and Bahrain which contributed to the daily atrocities of this war. Djibouti, Eritrea, and Somalia also opened their airspace, military bases, and territorial waters to the coalition. 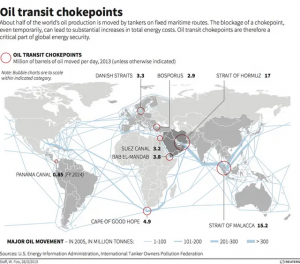 Why would all of these nations who never seem to agree on anything suddenly agree to start bombarding one of the poorest nations in the world? One reason could be the Iranian controlled Strait of Hormuz. 17 million barrels of oil a day pass through the Strait of Hormuz which is 20 to 30 percent of the world’s total consumption. It is the only route to the open ocean for one-sixth of the global oil production, one-third of the world’s natural gas, and it is the only path from the oil-rich Arabian Gulf to the Indian Ocean for maritime traffic.

For decades Saudi Arabia, Kuwait, Qatar, and the United Arab Emirates have been trying to find a way around the Strait of Hormuz which Iran controls. In September of 2015, Saudi Arabia released a study that purposed a 590-mile long water canal that would connect the Arabian Gulf with the Arabian Sea to bypass the Strait of Hormuz. The plans for this water canal were released just as tensions began to rise in Yemen, which is why the Saudi study suggested an alternative route through Oman. 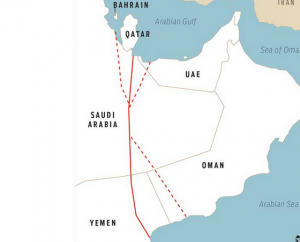 A Saudi Official named Saad Bin Omar told Gulf News in an article published in 2015 that the canal will be, “150-meters wide and 25 meters deep, the canal will have a main course across Saudi Arabia and Yemen however, we have thought of Oman as an alternative for Yemen if the country suffers political instability.”

Saudi Arabia, Kuwait, Qatar, and the United Arab Emirates would benefit greatly if a water canal was built to bypass the Strait of Hormuz, and is it a mere coincidence that all of these countries are also members of the Arab Coalition invading Yemen? In 2018 Saudi Arabia also threatened to turn Qatar into an island by building a water canal along its border with Saudi Arabia. Saudi Arabia accepted international bids to dig the canal dubbed the Salwa Canal. 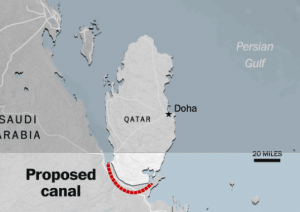 “Five international companies with expertise in digging canals have so far submitted their tenders for the Salwa canal inside the territories of Saudi Arabia and alongside the Saudi-Qatari borders. The name of the winner will be announced within 90 days, and the company will have one year to complete the task,” the Saudi Daily Makkah reported.

it begs the question, does Saudi Arabia intend to build a water canal from the Arabian Gulf to the Arabian Sea, or is this just propaganda that Saudi Arabia uses to try and intimidate their foes? If Saudi Arabia does intend to dig this water canal through Yemen to bypass the Strait of Hormuz, then Iran would undoubtedly be opposed to that project. Why isn’t this ever mentioned as a reason for the quagmire in Yemen? At least it would provide a logical explanation of the continued violence in Yemen. Instead, global leaders would rather mislead the public about the ongoing genocide in Yemen. 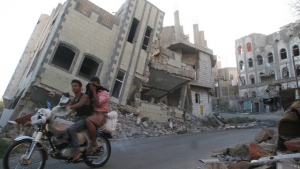 Dr. Mohammed Al-Maitami the Minister of Planning and International Cooperation for Yemen went on to write, “the Gross Domestic Product (GDP) of the oil and gas sector shrank by about 75.7%, contributing to a drop in the GDP per capita by 36.1% in 2015. The decline in oil and gas exports by about 84.5% in 2015 resulted in a lack of foreign exchange, deterioration of the national currency, higher inflation, and poverty rates.”

The fact that natural gas was down 80.3% from 2014 to 2015 and oil was down 76.8% in just one year truly underscores Saudi Arabia’s real objective in Yemen. How come Saudi Arabia can completely wipeout Yemen’s oil and natural gas sector in one year, but fail to defeat the Houthi rebels after five years of war in Yemen? If Saudi Arabia’s goal in Yemen was to halt the Houthi movement from overtaking Yemen, they failed, cause the Houthi’s still control Yemen’s capital city of Sana’a.

Saudi Arabia’s goal in Yemen was to devastate the Yemeni people and force the population into submission. Saudi Arabia wanted to make Yemen a failed state, and populate Yemen’s government with Saudi loyalists to perpetuate the Kingdom’s vision for Yemen. When the former president of Yemen Ali Abdullah Saleh was assassinated by Houthi rebels, the leader of the Houthi rebels Abdul Malik al-Houthi called it, “the day of the fall of the treasonous conspiracy.” 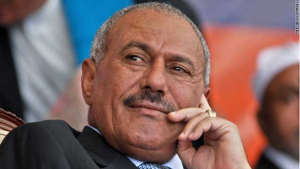 Three months before his death encrypted messages were obtained by the Houthi’s according to Houthi spokesman Mohamed Abdel Salam. In an interview with Al-Jazeera, he stated, “there were encrypted messages between Saleh, the Emirates, and a number of countries, such as the UAE, Russia, and Jordan.” Mohamed Abdel Salam told Al-Jazeera that the encrypted messages were allegedly negotiations between president Saleh and Russia were Saleh agreed to turn the capital of Yemen over to the Arab Coalition in exchange for Russia vying to remove Saleh from the UN Security Council’s sanctions list.

Even after these messages were released the Houthi rebels still showed faith in president Saleh. Houthi spokesman Mohamed Abdel Salam told Al-Jazeera shortly after the encrypted messages became public that, “we did not expect Saleh to plan to hand over the capital to the Arab coalition.” Two days before he was assassinated president Saleh broke his ties with the Houthi rebels and publically stated he has opened up a dialogue with the Saudi-led coalition. The Houthis accused Saleh of “undertaking an unethical betrayal against the Yemenis” 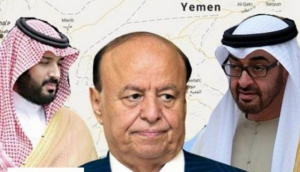 The current president of Yemen Abdrabbuh Mansur Hadi assumed office after the assassination of president Saleh, he was elected president in an election where he was the only candidate and the Yemeni people view him as an absently weak president. Abdrabbuh Mansur Hadi is currently in exile in Saudi Arabia. The only forces on the ground in Yemen backing Abdrabbuh Mansur Hadi are Saudi-armed Islamist Islah Party militia and Sudanese mercenaries. An article published in November of 2019 by the Middle East Monitor summed up the situation in Yemen with the title, “Riyadh delays the inevitable; the Houthis have the power in Yemen, Hadi has no authority.”

This highlights what anyone who is paying attention to Yemen knows, which is that Hadi has no power in Yemen even though the Hadi government is propped up by the international community as the legitimate president of Yemen. Abdrabbuh Mansur Hadi was only supposed to hold office during a transitional period and he was to relinquish his office after an election, but an election was never held and Hadi remains a puppet president. The United Arab Emirates and Saudi Arabia won’t allow an election knowing very well the Yemeni people will not vote for Abdrabbuh Mansur Hadi, and Saudi Arabia cannot risk someone who isn’t a Saudi loyalist being elected into office. 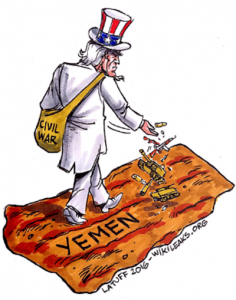 In November of 2016, WikiLeaks released the Yemen Files, which were a collection of 500 documents from the US Embassy in Sana’a. In the press release for the Yemen Files WikiLeaks states, “Yemen is of significant strategic interest as Yemen controls a narrow choke-point to the Red Sea and the Suez Canal through which 11% of the world’s petroleum passes each day. In addition, Yemen borders Saudi Arabia (to the north) and Oman (to the east) and has access to the Arabian Sea, through which another 20% of the world’s petroleum passes from the Strait of Hormuz.”

The Yemen Files revealed that the US had been arming, training and funding forces in Yemen leading up to the war. According to an email that was released by WikiLeaks between Yemen Major General Ahmed Ali al-Ashwal and US Army Colonel Randolph E. Rosin who was the US Defense Attache stationed at the US Embassy in Sana’a. The email is dated February 11th, 2014 and Colonel Rosin is responding to the Yemeni general’s request for 12 Comp Air Aviation ACA-9 Defender Aircraft, 8 Comp Air Aviation ACA-16 Defender Aircraft, 20 Textron Marine & Land System 47′ Motor Lifeboats, 93 Jeep J8 Light Patrol Vehicles and 500 to 1000 Flyer Advanced Light Strike Vehicles. 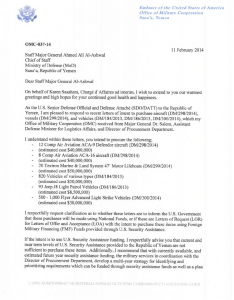 At the end of this email Colonel Rosin writes, “I look forward to building a strong, faithful, and mutually beneficial relations between our armed forces.” For context, this was at a time just before Saudi Arabia intervened in Yemen and when the US was “assisting” Yemen in its fight against AQAP and ISIS. The Yemen Files also reveal plans for a US-backed pipeline from Saudi Arabia through Yemen to the Arabian Sea. Saudi Arabia, Kuwait, Qatar, the United Arab Emirates, and any nation that profits from the oil these countries export have a vested interest in controlling Yemen. For the US and Saudi Arabia, it is about the Petrodollar. For European nations, it is about energy independence from Russia and Iran. The Yemeni people are the ones suffering the most from this real-life-genocidal game of Risk.

This “intervention” by the Arab Coalition has left 24 million people in need of protection and assistance in Yemen that is nearly 80% of Yemen’s population. 3.2 million requiring treatment for acute malnutrition, which includes 2 million children under five and more than 1 million pregnant women. More than 20 million across Yemen are classified by the UN as “food insecure,” and 14.3 million people are classified as being in “acute need.” As of 2019, 3.3 million Yemenis have been displaced in a war in which Saudi Arabia has directly targeted civilians in 67% of their airstrikes. Saudi Arabia targeted citizens in Yemen with over 4,900 airstrikes resulting in 12,000 deaths from airstrikes alone. Over 100,000 men, women, and children have been killed in this war, and there are no signs of the conflict ending. Saudi Arabia expected the war in Yemen to be easy and taking over Yemen was thought to be a cheaper option to them, instead of building a 590-mile long water canal. The people of Yemen have proven to be more resilient than any global power attempting to invade their lands since the 1950s. The “international community” needs to stop sending bombs to Yemen, and start sending humanitarian aid, they need to hold UN-monitored elections so the people of Yemen can vote for their own president.