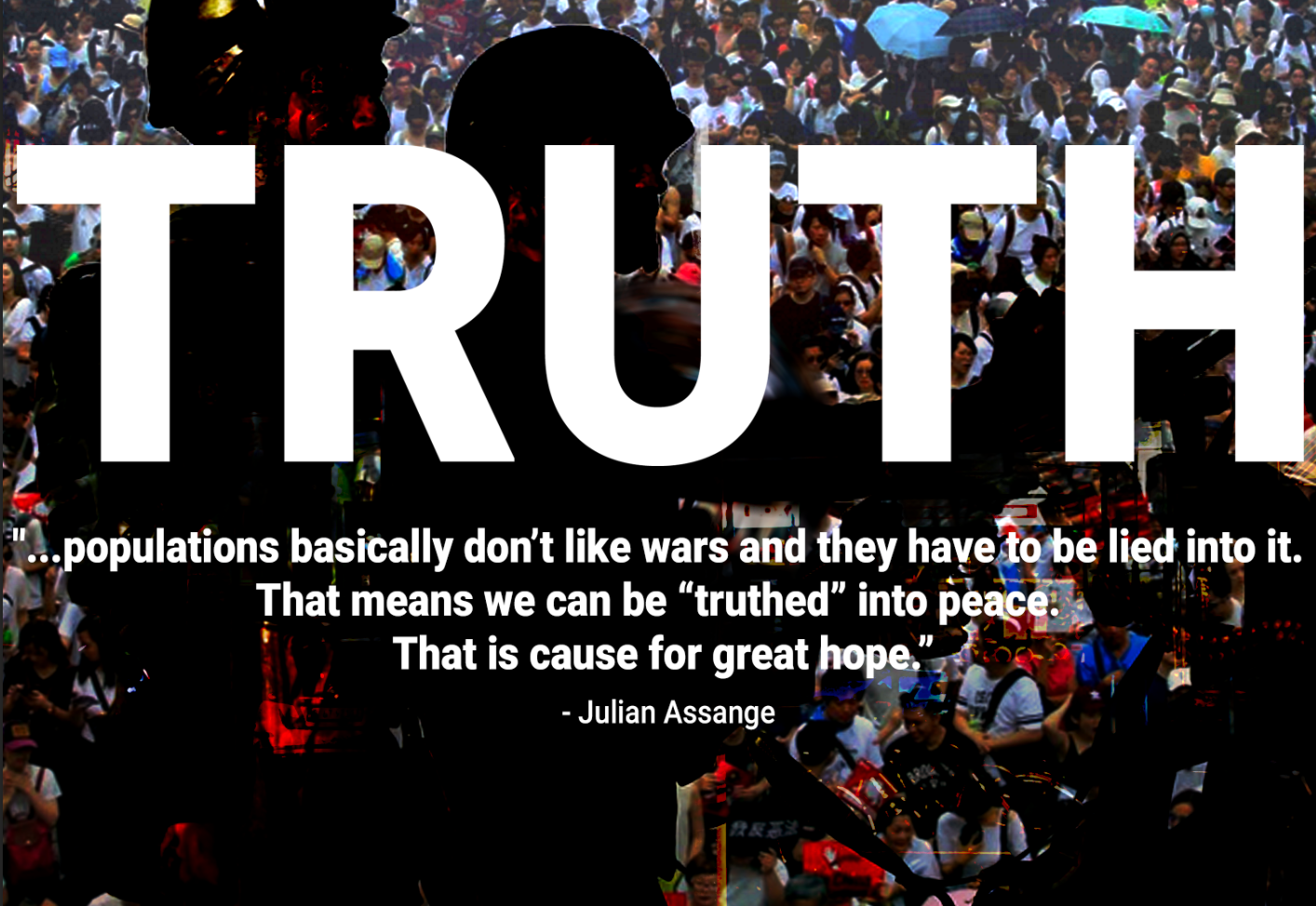 “…populations basically don’t like wars and they have to be lied into it. That means we can be “truthed” into peace. That is cause for great hope.” – Julian Assange

All what people want is peace, safety, security and freedom. Then why, are the head of states continuously promoting wars and creating conflicts to destabilize the countries and economies everywhere?

The war in Ukraine is filled with lies, deceit and destruction. Putin in Russia, in West: Biden in US, UK, EU 27 countries and other NATO nations. All of them claiming leading in “democracy” without practising it in real life. As the pandemic made it evident, none of them hesitated to establish state emergency powers, restricting access to information, applying state/corporate media censorship, limiting freedom of speech, establishing lockdowns, curfews and discrimination, like seen in countries governed by “Authoritarian” regimes. Isn’t it a fact that we already are living under authoritarian rulers worldwide, from East to West and South to North

Few weeks ago, people were protesting for their freedom, against their own country’s governments, now they are protesting against war in Ukraine. In the meantime, countries involved, are increasing fuel prices, asking people to save on energy and what is really outrageous is that, due to the pandemic many people have lost their jobs. Many of them have taken jobs in deliveries and other services that require using car. Today, fuel costs twice as much it cost a month ago. The EU’s super power Germany, published this week decision not to lift the VAT on gasoline, requesting citizens to save on other costs. The other headline from the same day, read: “every fifth child is living in poverty in Germany”. How can the people make the ends meet? Every nation today, is increasing their defence budget, wouldn’t it be better to work on global demilitarization and engage in peace talks than throwing more fuel to the fire? Feed and house the people who are going hungry to bed today?

I am not neutral when witnessing injustice, I take the side of the people and I condemn the leaders from Putin to Biden, from Brussels to every European country in region and beyond. The people are casualties of the human made war of the handful of politicians.

It might not seem appropriate to speak about “European people in poverty”, but as everyone is horrified when “white Europeans” end up as refugees, I hope this would place things into perspective and hopefully make everyone think deeper. Feel the terror and disaster also, what the people in Yemen and Palestine and in many other countries are experiencing already for many years. While the world, the western and eastern societies have watched silently, innocent children, women and men are getting killed on daily bases. In Yemen children have nothing to eat, the Russian Ukraine war makes life “hard” on us, but it makes the citizens in Yemen, moving from disastrous situation to catastrophe, it’s a war caused genocide that our own governments are directly funding.

Why we should pay attention to our own governments

For years the West has engaged in double faced travesty. Crying out loud for human rights violations committed by Russia or China, without giving the same amount of attention to human casualties in Palestine, Yemen, Iraq, Afghanistan, Syria and many African countries. Their actions have caused a million of casualties and displaced people in middle-east and Africa. The US alone is responsible for over 6 million people’s death in the past twenty years.

People fleeing from the Western nations financed destruction, are not welcomed to the safety of Europe, those who have succeed to arrive, are facing discrimination and racism. More in other countries than others. In countries like Belgium, especially among the Eurocrat’s, even many eastern European countries citizens are treated as a second-class citizen. In today’s crisis native Ukrainian refugees are more welcome than Ukrainian African refugees, what difference the skin colour makes in humanitarian crisis? The refugees from Syria, Yemen, Libya and other countries that are destabilised by the US and its coalition partners are facing barbed wires, beatings, rape and death in hands of the European Commission Frontex forces. It’s disgusting double standards and hypocrisy to categorize humans according to their origins.

NATO countries did nothing to deescalate and prevent the Russian Ukraine crisis. The contrary, led by the US they have bullied Russia for years, with NATO expansion, knowing the consequences and carry equal responsibility on displacing millions of Ukrainian citizens internally and externally with Russia.

The Western world nations have their hands wet with Ukrainian blood with Russia, as they have it in many middle eastern and African countries wars and genocides, both the East and the West aids with weapons and shaking hands with other tyrants alike. Not once the International human rights or the UN Security Council has placed sanctions against the US, UK or any of the EU countries that supply arms to conflict ridden regions. Not once the International Criminal Court in Den Hague has convicted any of the Western leaders for war crimes (except in Balkan war). Not because they are innocent, but because of a justice system that is rigged, stays blind and deaf to certain crimes, while prosecuting others that are from countries, the “West” identifies as undesirable, especially if the leaders don’t agree to be dictated by the US ruler.

Do we, the Europeans in middle of this, agree to go with the flow, or do we finally wake up, rise up against our leaders, dare to walk to opposite direction and hold them to account!

Protest against your own country’s NATO membership, military and defense spending, demand justice and peace with everything you have in your disposal. We, the people, should not stand by silently, and let the leaders steal our human rights and peace away. Peace must come everywhere, from Palestine, Yemen, Southern Cameroons and any other country where civilians are forced to flee or die. To understand, place yourself to other people’s shoes. Feel their pain, even its not yours, imagine if it would be you, who has nothing to eat, home maybe for today, but tomorrow it might be gone.

This is a War of world leaders against the citizens and humanity as a whole, where people need to stand in solidarity side by side, not divided or siding with their tyrannical leaders.

The Censorship in East and West

“Censorship is always cause for celebration. It is always an opportunity because it reveals fear of reform. It means that the power position is so weak that you have got to care what people think.”

“What does reveal? It reveals fear.” – Julian Assange

The wars that were started with manipulating public opinions, using media, implanting protest provocateurs and using dirty tricks to win elections, using corruption and political coercion have destabilised global peace for years. Since 24th February, this year there is more censorship and opinion manipulation, than we have experienced the past two years during the pandemic. In west podcasts are cancelled and YouTube is taking down content that relieves foreign governments involvement in Ukraine. In Russia the state owned media uses propaganda to manipulate Russian citizens to believe lies, justifying the invasion of Ukraine and arrests thousands of protestors who protests against the invasion.

On the 4th March, Putin placed a law in force than carries up to 15 years prison sentence for anyone who speaks or protests against Ukraine invasion. Russia was already dangerous place to be a Journalist or a dissident, today the punishment for expressing opposing opinion is punished harsher since the old Soviet era times.

In the west, the US war on independent journalism, is seeking for global jurisdiction to shut up anyone, who exposes their war crimes and human rights abuses. Or expresses different opinion against their premeditated narrative. On March 14th the UK’s Supreme Court denied the appeal request filed by, the Wikileaks founder Julian Assange, who has been arbitrary arrested over 12 years for exposing the US war crimes in Iraq and Afghanistan.

Julian Assange has been subject to psychological torture and defamation orchestrated by the US and its allies. The UK’s Supreme Courts refusal to accept his appeal, is a death blow to democracy and freedom of the press. It exposes us the state of judicial institutions corruption and should scare everyone, who seeks to receive “justice”. The judicial system that ultimately serves only the best interest of the corrupted political leaders in power, not the journalists and citizens speaking the truth or seeking for justice.

To conclude: it is our responsibility not to accept the unacceptable anymore. Don’t think you don’t have a power to change things, because it would mean you have already given up all the hope. Our hope is in searching for the truth and questioning everything what the leaders say and what the media reports.