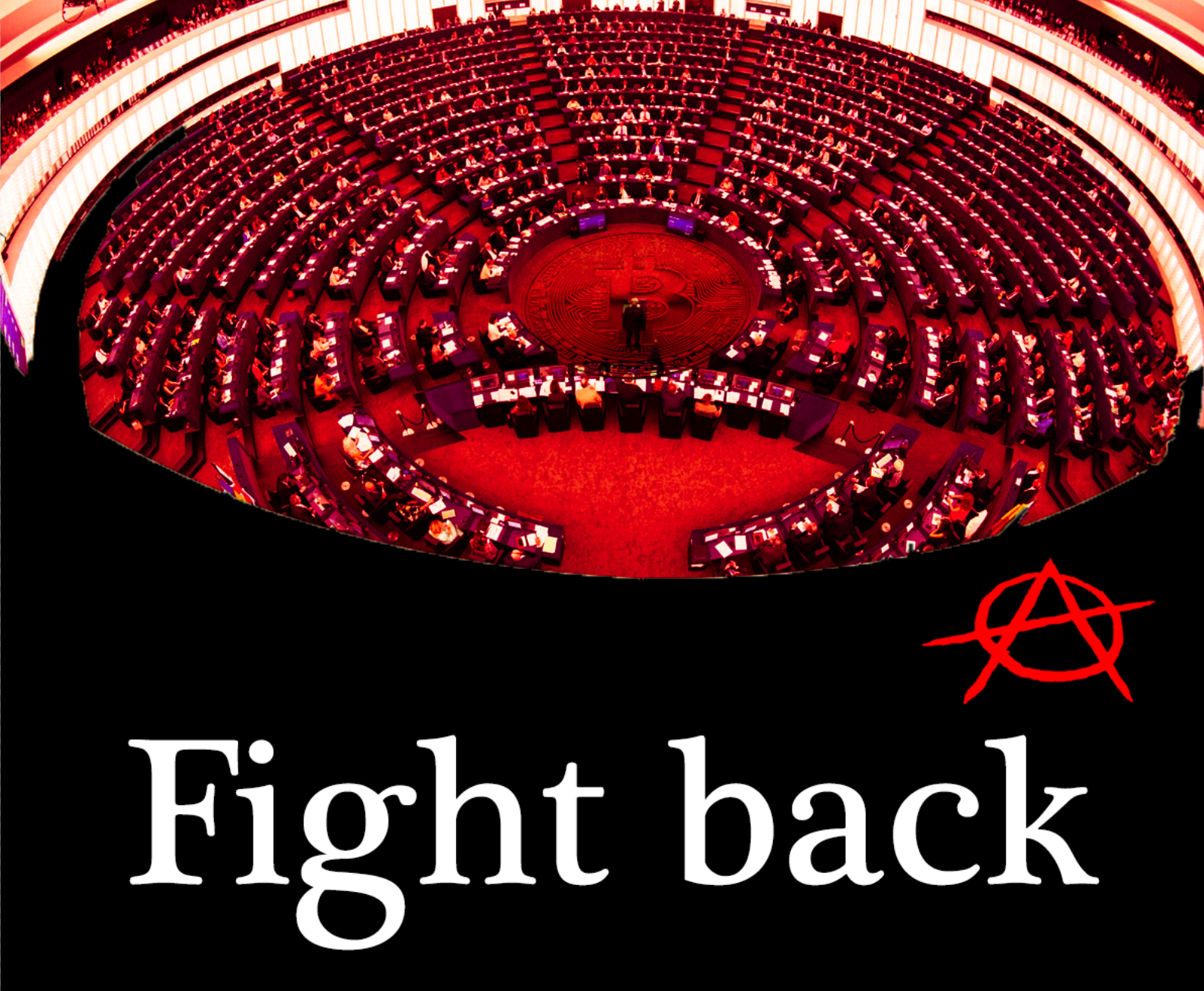 “I don’t care to know their reasons, as they cannot be justifiable and true. By regulating peoples finances they are placing everyone inside an iron cage. Where they drop the pennies when it suits them. The Decision makers in the meantime, spend billions on tanks and weapon for mass destruction. Are you going to make your own decisions, or play the role of the victim, the weak who stay in their servitude?” Rise up! Resist States and EU Tyranny!

EU’s recent attack against anonymous payments using cryptocurrencies is an attack on individual financial freedoms. It is banned, using money laundering and tax evasion as an excuse, but will hurt the ordinary citizens more, than the large corporations that have several ways to funnel their profits and evade taxes in their countries of operations.

The EU Commission President, herself has been twice accused for maladministration and wasteful spending during her career, we are speaking about use of tax payers money. First as a Defense Minister of Germany and again, in 2020 by not respecting transparent procedures when hiring Black Rock services. Again, in Spring 2021 when negotiating multi billion deal with Pfizer CEO, using WhatsApp messaging services.

Valdis Dombrovskis, Latvian, Executive Vice-President in the European Commission is in charge of anti-money laundering file. A member of Latvian New Era party, described as “nationalist”, pushing agenda, that would vanish free higher education and replace it with student loans.

The EU regulator body has taken zero interested on guarding the rights of individual freedoms and human rights. They have taken on restricted citizens freedoms, using any excuse they can find, building on regulating the regulations, using the sky as their limit to how far they can go, before the citizens will revolt.

Ban on anonymity using cryptocurrency is just one of the legislation’s, in process that are hurting law abiding citizens more, than any of the multimillionaires and governments officials, removal upper limit of 1000 euro, lets the state know every pizza order you place and pay in Crypto. Comparable to in the supermarket cashier asking people to provide their ID card, before accepting a cash payment for a lemonade.

The new legislation is setting a dangerous precedence on how the state controls and tracks everything the citizens are doing. From purchases to soon private communications, in form of mandatory ChatControl legislation. In the future, when all transactions are traced, people find a tax auditor behind the door asking “How could you afford to buy… “just a pizza”! When the states steal away citizens financial freedom, they gain power to turn off the tap, just like Putin can turn off the gas. Block access to assets of individuals, literally we are speaking about placing sanctions on citizens that don’t obey the state narrative, or are deemed to threaten the power structures. Right to Dissidence and rebellion is written in many constitutions as part of fundamental rights of the people. So, in the ends this right will be abolished as well.

Once taxed income spend, shouldn’t be under any scrutiny, at least up to several hundreds of thousand euro’s. The corporations, millionaires are the ones that deserve to be placed under magnifying class. Not the citizens.

Is this the Europe anyone wants to live in anymore? People elect others, to protect their rights, without realizing that it is the political party, who in the end decides, how your elected representative will vote. Political parties are not “Democracy”, they don’t necessary share the values of the person, who you elected, and what they told in their elections speeches. Belonging to a political party is like a cult, you join with higher values and yearning to serve for the good of the humanity, but each week that passes, these values will become more stained, they fade away and are replaced by what the party leadership wants you to do.

This is why elected representatives isn’t ‘Democracy’. It’s an illusion of free society that needs to be demolished and replaced with one, where the citizens directly get involved in common matters. Only then, we can see the people in power to be held accountable for the past and present mismanagement. The people are today labelled as “criminals”; and the people in power are the lying “saints”, far away from the truth.

In EU countries, the citizens are Criminals until proven innocent, if the current trend isn’t stopped. The EU Commission, the countries judiciary system and the law enforcement are outside of these new regulations and legislation’s. Many are protected under diplomacy and status provided immunity. The law enforcement is notoriously involved in many criminal activities, including pedophilia, money laundering and tampering with evidence when person in high position falls under suspicion.